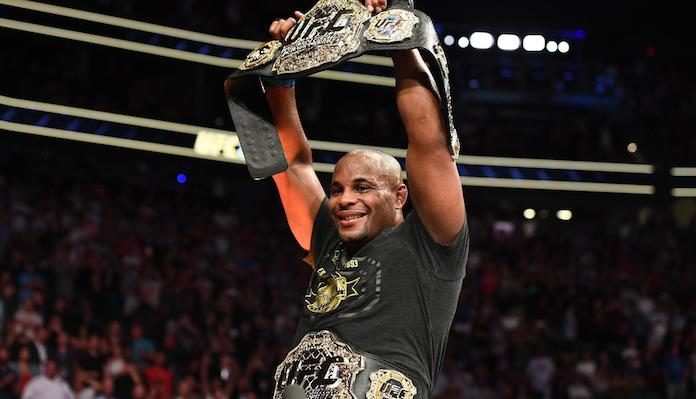 Daniel Cormier has spent the majority of his career competing as a heavyweight, but from 2014 to early 2018, he spent a nine-fight stint in the light heavyweight division.

While Cormier realized massive success as a heavyweight, capturing the light heavyweight title and beating the likes of Dan Henderson, Anthony Johnson (twice), Alexander Gustafsson, Anderson Silva and Volkan Oezdemir, his time in the division was not easy.

Before each of his fights, Cormier had to endure a miserable cut down to the light heavyweight limit: 206 lbs for non-title fights and 205 lbs for title fights.

Speaking in a recent Instagram post — complete with a photo — the former champ looked back on his brutal cuts down to the light heavyweight limit, and thanked his team for helping through these harrowing ordeals.

See what Cormier had to say below.

“This is what making 205 always looked like for me, can you imagine doing this without a team like this behind you. A team that lifts you when you’re down. Helps you to go when you have no more. I am lucky for my guys. @beowulf.experience @crazybobcook @camacho100 @themeleeway @leandrovbteam @officialcainvelasquez @rosendo_sanchez @slikbxr @bunchthegreat @akajav. They always uplift me. And to think I’d go through this every Friday and became the champion. Put some respect on my name!” – Daniel Cormier on Instagram.

After defending the UFC light heavyweight title with a second-round TKO of Oezdemir, Cormier returned to his former haunts in the heavyweight division to challenge reigning champ Stipe Miocic. Cormier knocked Miocic out in the first round, swiping the title for himself. He then defended the title with a second-round submission of Derrick Lewis before surrendering it via fourth-round TKO in a rematch with Miocic.

At present, Cormier is waiting for a tie-breaking trilogy fight with Miocic, but he’s stated he will retire if the bout isn’t made by this summer.

Are you surprised Daniel Cormier was able to make the light heavyweight limit so many times?