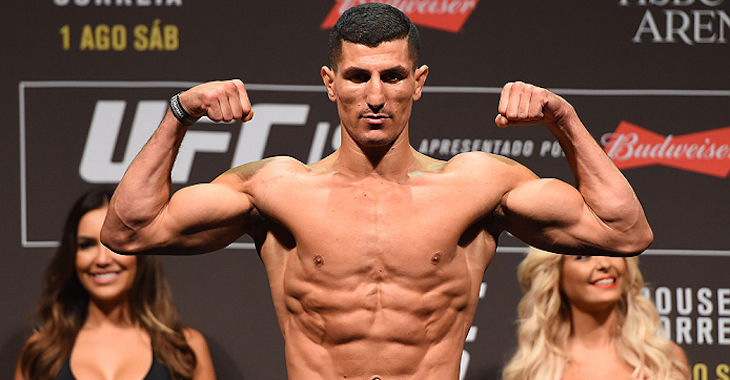 Round one begins and Teleb starts things off with a hard low kick. He presses forward and lands another. Enkamp misses with a front kick but then connects with a spinning back kick. Taleb continues to press forward and lands a low kick. Oliver returns fire with a kick to the body. The fighters circle away from the cage and then Taleb comes in with another low kick. The fighters exchange right hands. Another good low kick scores for Nordine. Enkamp misses with a wheel kick. He shoots in for a takedown but Taleb defends the shot. Oliver still has Nordine pressed up against the cage and is working for a single leg. He gets it and winds up in side control. Nordine immediately gets back up to his feet and lands a knee. Enkamp catches Taleb with a nice shot and then circles out. The fighters clinch up and begins exchanging knees. These are hard shots from both men. Taleb grabs a leg and scores a takedown. Enkamp immediately begins working for an armbar. Taleb defends the submission and passes to side control. The horn sounds to end round one.

Round two begins and Taleb immediately presses forward and lands a low kick. Oliver returns fire with a kick to the body. The fighters begin trading punches. Oliver shoots in for a takedown but it is not there. Taleb with a nice left hand. Oliver misses with an axe kick. He just misses with a spinning back elbow. A nice jab from Taleb finds a home. He lands a pair of lefts. Nordine’s confidence is growing now. Enkamp continues to throw some fancy strikes but nothing is finding a home. Nordine with a left hook that lands flush. Enkamp shoots in for a takedown but Taleb defends well. After a scramble Nordine winds up in top position and is in side control. Taleb with a nice elbow and then a short shot. Oliver attempts to scramble but gives up his back. Taleb with a nice punch from the back. He scores a hard elbow and moves to half guard. Oliver eats a couple more elbows from Nordine before the horn sounds to end round two.

Round three begins and Oliver is able to partially land a right high kick. Nordine seems to be ok and presses forward. Both men land left hooks. Taleb with a low kick and Oliver shoots in for a takedown. It is not there and Taleb circles out. Again the fighters exchange left hooks. Oliver throws a kick but Nordine catches it and then lands a hard low kick of his own. Taleb with a nice jab to the body. He goes upstairs with a punch. Nordine shoots in and scores a big takedown. Enkamp is working for a guillotine choke. He tries to use the submission attempt to stand back up but Taleb is not having it. One minute remains and Nordine is in full guard. Oliver tries to throw up a triangle but Nordine defends well. Taleb with more pressure from the top. He lands a short elbow. Round three comes to an end. This should be Nordine’s fight.