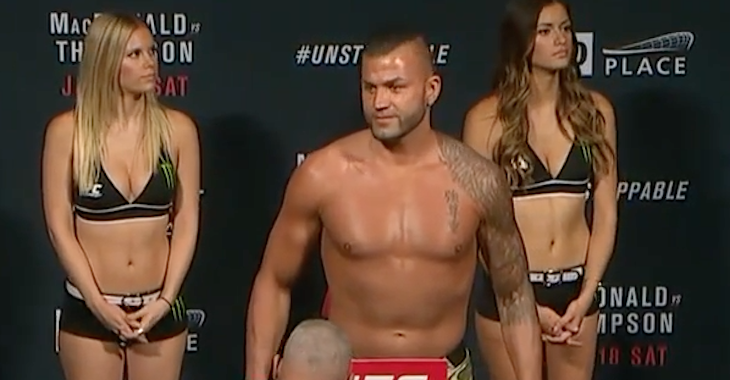 Round one begins and Bosse lands a big right hand. O’Connell fires back with a huge left. Bosse with another massive right hand. O’Connell replies with a leg kick. Bosse with a right hand. O’Connell rocks him with a counter. He lands another massive punch that drops Bosse. He follows Steve to the ground and starts unloading. Bosse somehow survives and returns to his feet. Bosse lands a huge right on O’Connell. Sean eats it and presses forward. He lands a leg kick on Steve. O’Connell with back to back big left hands. He follows up with a right. Bosse replies with a knee against the fence. O’Connell presses Bosse against the cage and fires an elbow. Bosse with some short shots to the body. He gets free and lands some big uppercuts to the body. Bosse hits Sean with a big left hook. These guys are tough as nails. Bosse with an uppercut and then a spinning back fist. O’Connell absorbs the punishment and clinches up. Bosse presses him against the fence and shoots for a takedown. It is not there. Round one comes to an end.

Round two begins and Bosse lands an inside leg kick. Huge punches from both men. Bosse lands a big shot. O’Connell shoots in and drives Bosse against the fence. Steve lands a knee to the body. O’Connell is landing some short knees inside. Bosse switches the position. O’Connell quickly reverses him. The fighters break. O’Connell lands a nice left hook. Bosse lands a huge right hand on Sean. O’Connell goes for a kick and falls to the ground. Steve is landing some big shots from the top. A nice upkick scores for O’Connell. Bosse with some big shots from half guard now. He is battering O’Connell. Steve with a bunch of hammer fists. He moves to side control. Big right hands drop down from Bosse. O’Connell scrambles. He can’t get up. Steve takes his back. Sean scrambles again and returns to his feet. Bosse with a big right hand. O’Connell with a knee. Round two comes to an end.