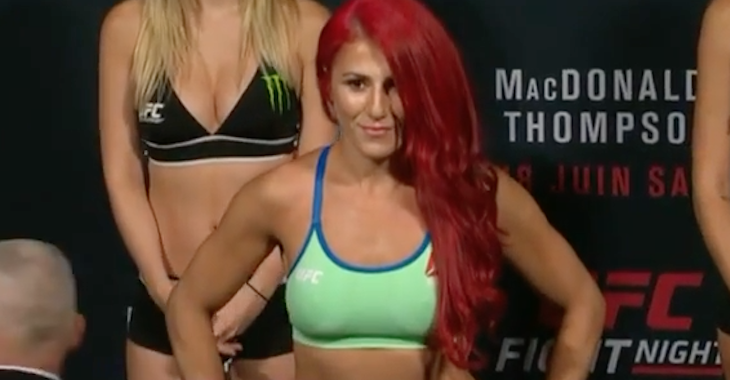 Round one begins a Randa presses forward with punches. She is trying to get Jocelyn against the fence. Jocelyn circles away. Randa presses forward with more strikes. She backs up Jocelyn and clinches her against the fence. She lands some nice uppercuts. Jocelyn is able to switch the position and press Ronda against the cage. Markos breaks free. She comes charging forward with strikes. Randa clinches Jocelyn against the cage. Both fighters are landing short strikes. They break and Randa lands a nice right hand. Jocelyn shoots in and lands a takedown. Ronda immediately goes for a heel hook submission. She utilizes the attempt to gain top position. Big left hands from Markos. She is teeing off on Jocelyn. Round one comes to and end.

Round two begins and Jocelyn is able to land a nice left. Randa fires back with punches. A good kick lands for Jocelyn. Markos fires back with a right hand. Jocelyn has taken the center of the cage. She is beginning to land combos on Randa. Markos shoots in for a double leg but Jocelyn defends. A nice combo lands for Markos. Jocelyn replies with back-to-back leg kicks. Both women decide to stand in the pocket and trade shots. Randa’s hands look low. She may be tired. She presses forward with punches however. Jocelyn responds with a shot. Another big combination from Ronda. Markos shoots in for a takedown. It is not there. Jocelyn with a jab, Randa replies. Round two comes to an end.