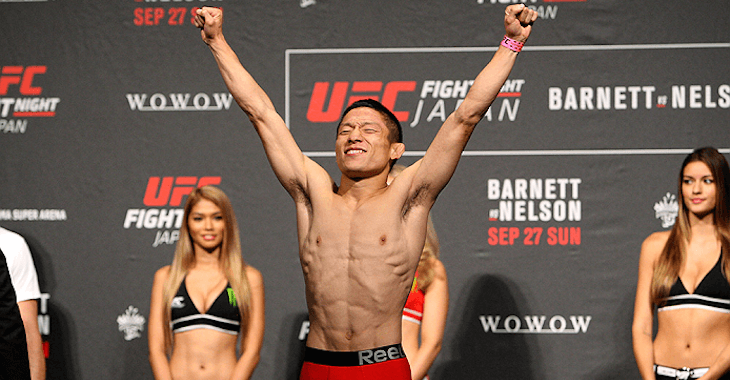 Round one begins and Horiguchi throws a body kick and then a big right hand that lands on Seery. Huge left hand scores for Horiguchi and drops Seery. Kyoji lands a good shot to the body and then another from top position. Neil lands a sweep and gets back to his feet. Horiguchi comes forward and lands another takedown on Seery. Neil gets back to his feet.
Big right hands land for both fighters. Horiguchi with a good jab and then another big shot that drops Seery. Neil gets back up and throws a one-two combo. Good left hand from Horiguchi. Kyoji lands a takedown. He scores a big right hand from the top. He moves to side control position after Neil scrambled but failed to get up. Knees to the body from Horiguchi. Seery gets back to his feet but eats some shots for his efforts. Nice kick from Kyoji. Round one comes to an end.

Round two begins and Horiguchi opens up with an excellent combo. More shots from Kyoji land on Seery who looks to be in trouble. Neil is bleeding under his right eye. Horiguchi scores a trip-takedown. He begins working from half guard. Neil scrambles and gets back to his feet. Nice leg kick lands for Kyoji. The flyweights trade shots. Nice right hand from Horiguchi. Seery with a kick to the body. Horiguchi misses with a high kick. He attempts a takedown but Neil stuffs it. Good leg kick from the Japanese fighter. Seery lands a left hand. Good knee to the body and then a left hand from Horiguchi. Kyoji lands a takedown and immediately moves to side control. Neil is able to scramble back to half guard position. Round two comes to an end.

Round three begins and Horiguchi lands a quick combo to start. He follows up with a crisp jab. Good left hand lands for Seery. Horiguchi presses Neil against the fence and lands a takedown. Neil gets back to his feet but Kyoji lands a huge left hand that rocks the Irishman. Horiguchi is landing big shots now. Excellent leg kick from Kyoji. Seery eats it and moves forward in search of a takedown. He doesn’t get it and Kyoji reverses the position. The fighters break and Seery lands a left. Horiguchi shoots in and scores a takedown. Seery gets back to his feet but eats some knees to the body for his efforts. Good right hook lands for Neil. Horiguchi responds with a left. He drops Seery with another big shot but the Irishman pops right back up. One last takedown for the Japanese fighter and this one is over.