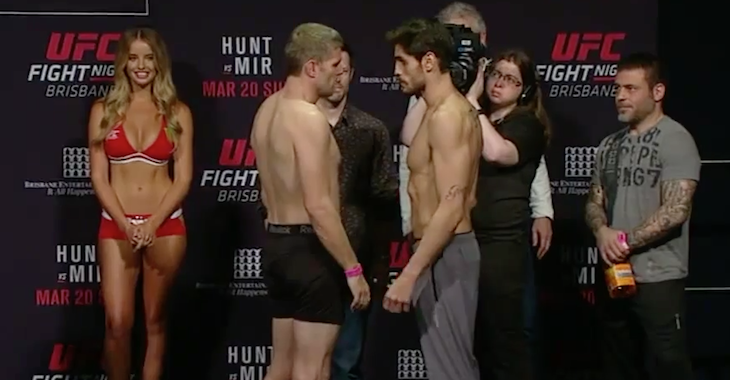 Round one begins and Dan Kelly and Carlos Junior exchange kicks. Antonio gets a double leg takedown and immediately takes the back of Kelly. He is looking for a rear-naked choke submission. He locks up a body triangle and continues to attack the neck. Kelly rolls but cannot escape. Nice elbow from the back by Carlos Junior. Good shots from Antonio who is still searching for the choke. Big shots land from Carlos Junior. Antonio looks for an armbar at the end of the round, but cannot lock it in before the horn sounds.

Round two begins and Carlos Junior opens by missing a head kick. Good jab from Antonio and then a couple of solid leg kicks. Another nice jab lands for Junior. Kelly with an uppercut. Daniel with two crisp jabs back to back. Antonio shoots in but Kelly defends and lands a knee. Nice right hand lands for Carlos Junior. Both men are swinging big shots. Good left hand from Kelly. Antonio shoots in but Kelly with a great sprawl. He takes the back of Junior and starts unloading some big shots. Antonio fights his way back up. Nice leg kick from Kelly. Junior responds with a front kick and then a takedown. He gets the back of Kelly but is very high. Daniel slips out and lands a nice right hand. Carlos Junior falls down but gets up and appears to be ok. Nice combination lands for Junior. Round two comes to an end.

Round three begins and Kelly opens with a nice two punch combo. Big knee to the body from Carlos Junior. He throws another knee that catches Daniel in the groin. Kelly drops and we take a break. Back to fighting and Kelly charges forward with punches. Good jab from Antonio. Kelly with a knee as Junior shoots in. He takes the back of Junior and starts unloading shot. Junior is bleeding bad. Massive shots from Kelly. It is all over. What a comeback. He was the biggest underdog on the card.

Daniel Kelly defeats Antonio Carlos Junior via TKO at 1:36 of round three