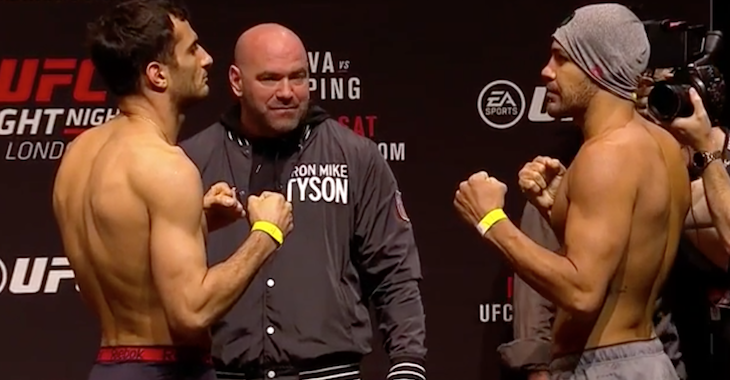 Round one begins and Mousasi opens with a right hand. Leites eats it and shoots in for a takedown. Gegard holds him off at first but Thales now has a body lock. He tries to drag Mousasi to the floor but Gegard winds up on top. He quickly exits the guard of Leites. Nice right hand lands for Mousasi. Leites comes forward but eats a counter left from Gegard. Nice jab from Mousasi and he follows that with leg kick. Good punch from Leites but Gegard answers with back to back jabs. Nice leg kick from Mousasi. Leites returns fire with a solid leg kick of his own. Good jabs from Mousasi land crisp. Leites shoots for a takedown but Mousasi says no. Leites has him pressed against the fence and scores with a couple of knees to the body. Mousasi with the trip. He lands a nice shot from the top and stands back up. Under a minute remains. Good inside leg kick from Gegard. He follows that up with a jab. Round one comes to an end.

Round two begins and Mousasi opens up with a couple of nice rights. Good counter left scores for Gegard. The former Strikeforce and Dream champion is stepping it up. Another right hand. Quick jab from Mousasi. He lands a good combination but Leites fires back with a left hand. Thales shoots for a takedown but it is not there. Nice leg kick scores for Leites. Good jab from Mousasi. Leites fires back with a combo. Mousasi with a right hand. Leites replies with a leg kick. Nice left hook lands flush for Gegard. He scores with the jab and again. Leites tries another takedown but Mousasi stuffs it. Gegard begins working his jab. He lands a good leg kick and then a right hand. Leites looks to be slowing down. Another right hand for Gegard. Leites shoots in again but he doesn’t have the energy. Mousasi kicks Leites a few times before the end of the round.

Round three begins and Leites is coming forward. He pulls guard on Mousasi and locks up an arm. Gegard begins working right hands from the top. Mousasi gets his arm free and stands back up. Leites with a nice left hook. He’s coming forward and landing big shots. Mousasi fires back with a left hand and then a front kick. Gegard with a good right hand and then another. Leites dives in for a takedown but it is not there. Mousasi ends up taking Leites down and moved to half guard. 90 seconds left. Leites has Mousasi in a shoulder lock but it’s not there. The horn sounds to end round three.