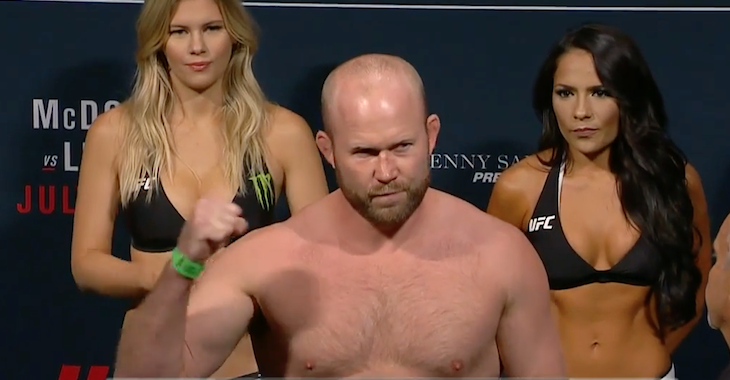 Round one begins and Samman quickly clinches with Tim and presses Boetsch against the cage. “The Barbarian” is able to switch the position and then earn a takedown. He lands some good strikes from top position. Josh ties Tim up and scoots his back against the cage. Samman is able to wall-walk and get back to his feet. The fighters break but Samman quickly uses some forward pressure to get back in the clinch. He pushes Boetsch against the fence and tries to take his back. Samman is not able to get the position and decides to break. He lands some good kicks to end round one.

Round two begins and Samman is able to land a head kick. He charges forward with strikes but Boetsch uses that to his advantage and lands a takedown. Tim begins landing some strikes. Samman scrambles. Boetsch winds up in half guard. He lands some nice elbows to the body. Tim is looking for a kimura. He switches back to strikes. Samman attempts to sweep Tim. Boetsch isn’t having it and begins landing some brutal ground and pound. Big rights from Tim. He is now in mount. Huge shots from the top. Samman is in all kinds of trouble. He is bleeding. More huge shots from Boetsch. The ref finally steps in and stops the fight.