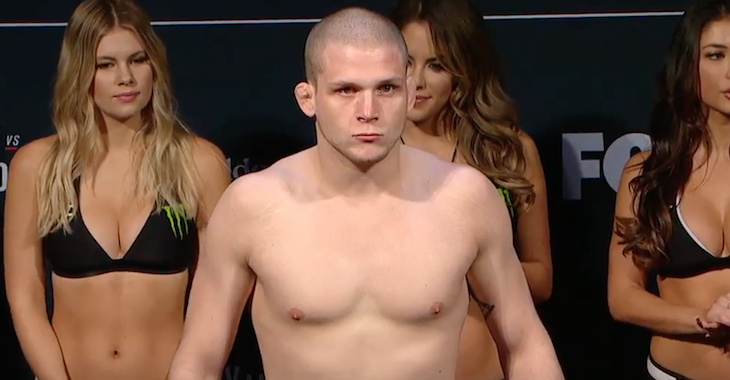 A welterweight scrap between James Moontasri and Alex Morono took place during today’s UFC on FOX 22 prelims in FS1.

Round one begins and Morono misses with an early high kick. Moontasri replies with a nice one-two combination. Morono circles and throws a leg kick. James responds with one of his own. Another low kick from Morono. James circles and lands a right and then a low kick. Morono presses forward and fires off with another low kick. James switches his stance and fires off a kick to the body of Alex. Moontasri scores with a nice front kick. Morono responds with an inside leg kick. Alex presses forward and misses with a front kick. James catches Alex with a beautiful counter left hand. He follows that up with a nice spinning kick to the body. Morono with some forward pressure and lands a left hand. Moontasri lands a pair of kicks to the body. He faints and lands a nice left hand. Morono misses with a spinning back fist attempt. He scores with a low kick and then another. Alex misses with a high kick to end round one.

Round two begins and Morono lands a low kick and then misses with a high kick. Moontasri replies with a low kick of his own. Morono presses forward and lands a nice hook during a crazy flurry of punches. James circles out but eats another low kick from Alex. Moontasri with a body kick. He lands a follow up low kick. Another big body kick lands for Moontasri. James follows that up with a right hand. Alex circles out and then comes forward with an inside leg kick. Moontasri with another hard body kick. Morono grabs a hold of him but James is quick to shake Alex off. Morono lands a nice counter punch and then presses forward with a front kick. He gets James against the fence and lands a big knee and then a right. He has James pressed up against the cage and scores a takedown. James gets right back up but eats a big right hand. Morono is able to break free and circle out. He throws a body kick but there was not much on it. Morono once again gets a hold of him and lands a hard elbow from the clinch. He follows that up with a right hand. James is bleeding now. Morono with a hard spinning back fist to close out round two.

Round three begins and Moontasri lands hard low kick to start. He goes inside with a follow up leg kick. Morono with a jab and then a right hand. He follows that up with a low kick. He is applying the pressure here. He lands another right hand and then an elbow inside. James circles out but Morono chases him down. Moontasri lands a good kick to the body. Morono charges forward and lands a massive right hand. More big shots from Alex. He is unloading here. A good jab from Alex and then a right hand. James throws a spinning back kick but eats another jab. Morono with a spinning back fist. He lands a push kick and then presses James against the cage. A good elbow inside from Morono. He follows that up with a knee. Alex switches to punches. Moontasri fires back with a body kick. Morono eats it and lands an elbow and then an uppercut. Another good jab from Alex. He scores with a right. He has James against the fence here. Moontasri circles off the cage but it busted up. Morono charges forward and connects with a big left. Moontasri scores with a spinning back kick to end round three.