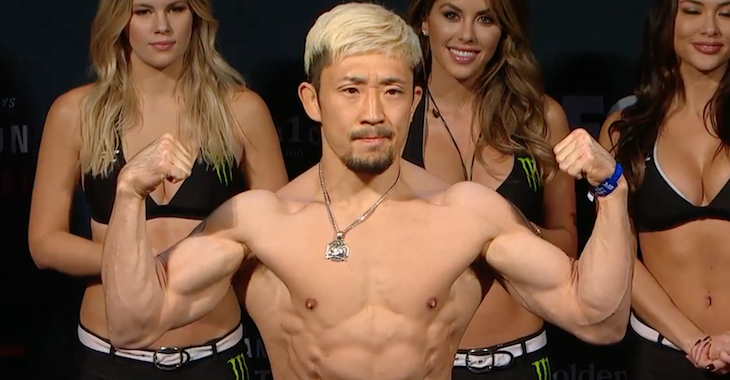 A featherweight bout between Cole Miller and Mizuto Hirota took place on today’s UFC on FOX 22 prelims in Sacramento, California.

Round one begins and Miller lands a low kick and then a follow up kick to the body. Hirota shoots in and presses Cole against the cage. They break and Cole pumps a jab. Mizuto returns fire with a low kick. Another nice jab and then a right hand from Miller. Cole grabs a hold of Hirota’s neck and drops down for a choke. Mizuto pulls his head free and works some shots from guard. Cole scrambles and stands back up. He misses with a jab. Hirota scores with a low kick. Miller replies with one of his own and then another. Miller circles out. Hirota lands a left jab. He follows that up with a low kick. Cole scores with a right but Mizuto replies with one of his own and then scores a takedown. He begins working some big ground and pound. Cole scrambles and gets back to his feet. He lands a knee inside. Hirota shoots for a takedown. He gets it and lands in full mount. Good shots from Mizuto. Cole gets to half guard but eats some ground and pound for his trouble. Round one comes to an end with Hirota on top.

Round two begins and Miller presses forward with a jab and then throws a leg kick. Mizuto replies with back to back low kicks of his own. Miller circles and goes to the body with a kick. Hirota lands a left hook and then shoots in and scores a takedown. Miller quickly dives for a leg and searches for a leg lock. Miller uses the submission attempt to take top position. He does but it is Mizuto landing some shots from his back. Hirota scores a switch and winds up in top position and begins working from full guard. He lands some big left hands and then switches to rights. He moves to half guard. Big shots from the top by Mizuto. These shots are short but landing hard. He postures up and lands some more nice shots from the top. He grabs a hold of one of Cole’s legs. He may drop down for a heel hook. He opts against that and begins raining down some more ground and pound. Round two comes to an end.

Round three begins and Hirota lands a jab to the body. Miller scores with a low kick but Mizuto shoots in for a takedown. This time Cole is able to defend the shot and break free. Mizuto steps forward and lands a left and then a right. Cole replies with a knee inside but Hirota shoots in and easily scores a takedown. He begins working from half guard. The fighters jockey for position but Hirota maintains on top and in half guard. He begins working some short shots. Mizuto postures up and drops down some big shots. Miller did not like those. More good left hands from Mizuto. He is smothering Cole with punches here. He lands some nice elbows and punches to close out round three.