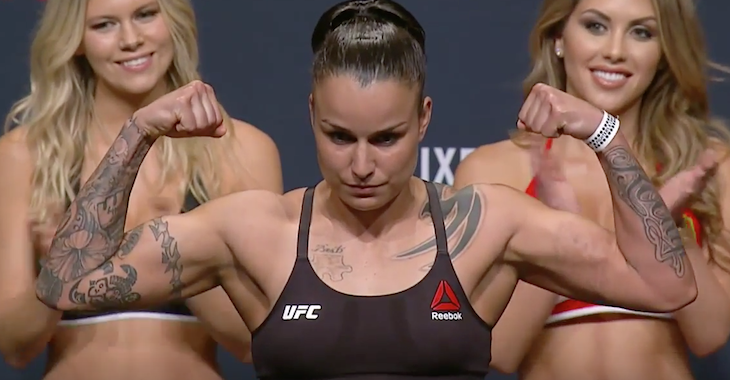 Round one begins and Correia lands a good left jab. Pennington with a leg kick but Bethe catches it. The fighters exchange left hands. Good jab by Correia and then another. Nice combo from Bethe. Raquel responds with a good shot and moves in for the clinch. They break. Correia with a nice combo. Raquel with a leg kick. Nice kick lands from Bethe. Correia with some quick jabs. Nice combo from Bethe. Pennington with a good right hook. Bethe did not like that. Another good right from Pennington finds a home. Bethe gets a hold of Raquel and lands some knees. They break and Correia lands a combo. Leg kick from Bethe. Raquel comes forward with punches but they miss. Bethe clinches up and pushes Pennington against the cage. Nice shots from both women to end round one.

Round two begins and Bethe throws a good left hook that partially lands. Good leg kick from Raquel but Bethe replies with a good counter punch. Another left hand and a knee lands for Bethe. Raquel with two body shots. Bethe with a left hand. Another two good left counters from Bethe. Pennington lands a right hand. Bethe throwing some bombs but they miss. Nice right hand from Raquel. Correia with a nice combo. A nice left hook scores for Raquel. Bethe lands a punch and a knee. Raquel with some good elbows. These women are trading. Big jab from Raquel. Correia with a nice left hand. She pushes Raquel up against the fence. Nice uppercut from Bethe. Raquel switches the position and lands a big elbow and then a couple of knees. Round two comes to an end.

Round three begins and Bethe opens up with a jab. Big shots from both fighters. Correia with a good shot. Pennington responds with a big shot of her own. Knees from Raquel. These women are trading shots at a rapid pace. Excellent shot from Pennington. Bethe fires back with some good shots and a leg kick. Pennington is searching for a takedown, it would be the first of this fight. Bethe defends and eats a body shot. Pennington is all over her. The horn sounds. What a fight that was.