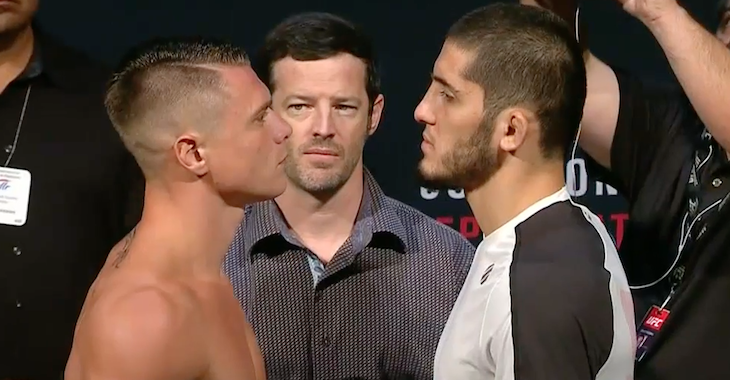 Round one begins and Wade comes forward with a front kick to the body. He follows that up with a solid leg kick. Makhachev shoots in and scores a takedown. He immediately transitions to half guard but Wade is able to pull off a sweep and wind up in top position. Makhachev locks in a triangle choke and it is tight. Wade throws down some big shots while locked up in the submission. Islam is forced to let go of the attempt. Chris continues to work some shots from guard before the horn sounds to end round one.

Round two begins and the fighters trade shots on there feet to start. Makhachev presses forward and Wade is able to lock up a guillotine choke. The submission hold is locked in tight and Wade drops down to finish Islam off. Makhachev somehow fights through the submission attempt and winds up in top control. Wade scrambles, Islam attempts to take Chris’ back but Wade is able to transition in to top control. Wade works a couple of shots before Islam is able to score with a sweep. Makhachev winds up in top position. He immediately takes the back of Wade but Chris won’t let him lock in either of his hooks. The fighters scramble back and forth for positioning and the round ends with Wade searching for a heel hook attempt.

Round three begins and Wade lands a leg kick. Islam fires back with a left hand. Wade presses forward and goes upstairs with a high kick that is blocked. Makhachev delivers a left hand and then presses Wade against the cage. Islam is able to complete a takedown attempt and Wade immediately begins working for a Kimura. He uses the submission to sweep Makhachev. Chris attempts another guillotine choke but once again Islam escapes the submission attempt and winds up on top. Islam is now working some short shots from side control. He moves to full mount. Wade scrambles and gives up his back. Islam secures a body lock and begins working for a rear-naked choke. Wade is able to fight off the submission but can not shake Islam from back mount before the horn sounds to end round three.