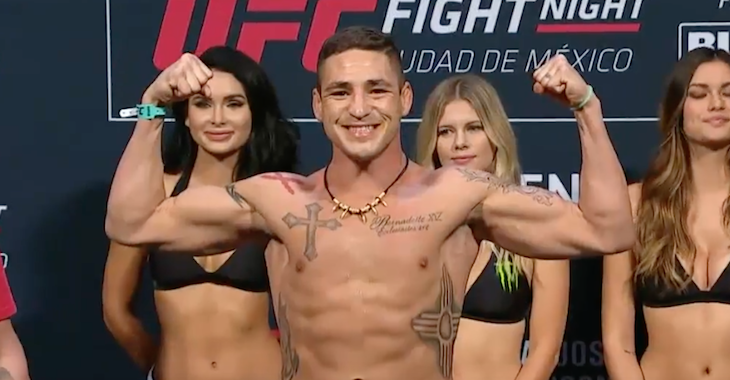 A lightweight scrap between Marcin Held and Diego Sanchez served as the co-main event of tonight’s UFC Fight Night 98 card in Mexico City.

Round one begins and Sanchez lands a nice body kick to start. Held comes forward with a combo that misses the mark. He lands a counter right hand. Diego eats the shot and attempts a high kick. Diego misses with an uppercut and eats a knee. Held shoots in for a takedown and presses Sanchez against the cage. Diego shakes him off and breaks free. Sanchez with a front kick. He comes forward with punches. The last of which finds a home. A nice body kick scores for Diego. A nice combination lands for Held. He scores with a left. Sanchez eats the shots and walks him down. Held with a cartwheel kick. Diego lands a high kick in reply. A nice left hand scores for Sanchez. Both men land shots. Diego shoots in for a takedown attempt. Held defends well. He locks in a guillotine choke. Diego literally runs up the cage to escape the submission. That was impressive. The fighters trade shots and the horn sounds to end round one.

Submission defense from the beautiful mind of @DiegoSanchezUFC #UFCMexico pic.twitter.com/SID08UgZ4P

Round two begins and Sanchez tells Held to come get some. Marcin dives in and tries to secure a leg lock. He has it but Diego spins and winds up on top. Big right hands from Sanchez. Held looks to lock up a heel hook. It is not there. Sanchez remains on top. He lands an elbow to the body of Held and another. Sanchez is not letting Held get back to his feet but he needs to do some damage here. He postures up and lands some short elbows from the top. Held tries a sweep but Diego stays on top. Sanchez with some short right hands. Sanchez takes the back of Held and lands some good shots as round two comes to an end.

Round three begins and Diego presses forward with a low kick. Held misses a spinning back fist. Diego comes forward with a combo. Held shoots in but Diego defends the shot. A nice knee scores for Held. He attempts to short in and Diego takes his back. Held scrambles and looks for a arm lock. He cannot secure the sub and Diego moves to side control. Good elbows from Sanchez. Another massive elbow lands for Sanchez. He is working from half guard here. Good shoulder slams from Sanchez. He is using everything here. Another big elbow lands for Sanchez. Held looks tired. He scrambles and looks for a sub but Diego is all over him here. 30 seconds remain. Diego lands a nice right hand. He moves to mount and lands some big shots. The horn sounds and this one is over.