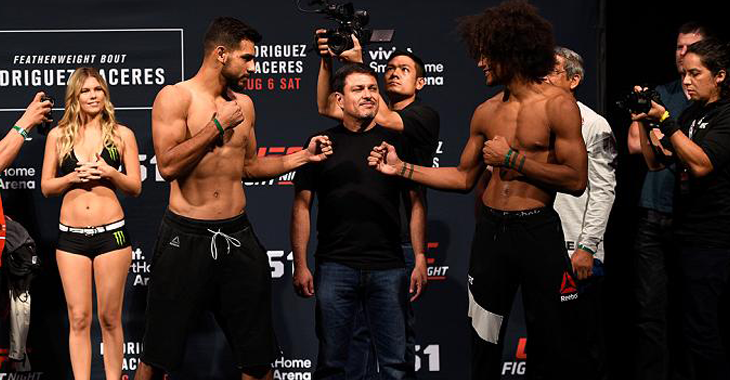 Round one begins and Caceres starts off with a leg kick. He lands another and then follows up with a superman punch. Nice shot to the body by Rodriguez. The Mexican lands a nice combo. Caceres with another leg kick. Rodriguez lands a high kick and then a right hand. He comes forward and lands a leg kick. He follows up with a high kick. Rodriguez comes forward with punches. He lands a head kick. The fighters tangle up and hit the floor. They bounce back up to their feet. Rodriguez misses with a front kick. A spinning kick partially lands for Yair. He lands another high kick. Caceres retreats and Rodriguez grabs his back. They break. A nice leg kick lands for Yair and then a jab. Round one comes to an end.

Round two begins and Rodriguez drops Alex with a leg ick. He misses with a wild follow-up kick. Caceres misses with a high kick. Yair tries a spinning kick that misses. Yair lands a back fist. He presses Alex against the fence. They break. Yair chases Alex down with shots. Yair with a kick to the body. Alex lands a leg kick. Rodriguez misses with a flying knee. Alex lands a push kick. Yair clinches up. The fighters break and Rodriguez lands a push kick. A big left scores for Yair. Alex responds with a nice jab. Both men exchange kicks. Yair with a nice kick to the body and then a leg kick. Another leg kick scores inside. Round two comes to an end.

Round three begins and Rodriguez lands a spinning kick to the body. Caceres follows up with a kick of his own. Rodriguez lands a knee inside and then a big left hand. Yair with a push kick. Alex leaps forward with a superman punch that misses. Rodriguez misses with a spinning kick. He seems to be slowing down. He presses forward with a combo that misses. Caceres lands a nice right hook. Yair replies with a side kick. A nice combo lands from caceres. He follows up with a knee. Big right hand from Alex. Yair misses with a high kick. Another nice right hook from Alex. Yair drops down for a leg lock but Alex winds up on op. Caceres with some short shots. He lands a big left hand and then an elbow. More shots from Alex to end round three.

Round five begins and Caceres lands a combination. Yair charges forward with shots. He lands a leg kick. Alex shoots in for a takedown. He presses Yair against the cage and works some short shots. Yair with a knee inside. He lands another. Yair with a stiff jab. Rodriguez follows up with a high kick. Caceres returns fire with a jab. Alex shoots in and lands a takedown. Rodriguez scrambles ad winds up on top. Alex scrambles and gets back to his feet. Nice left hook from Yair. He presses forward and lands a nice combo. 90 seconds remain. Yair with a spinning back fist that partially lands. Caceres lands a right hand. Alex presses forward and lands a leg kick. Yair returns fire with two leg kick of his own. One minute remains. Yair with a push kick and then a spinning kick that partially lands. Caceres comes forward but eats a jab. He lands a left hand. Rodriguez returns fire with a right. Round five comes to an end.