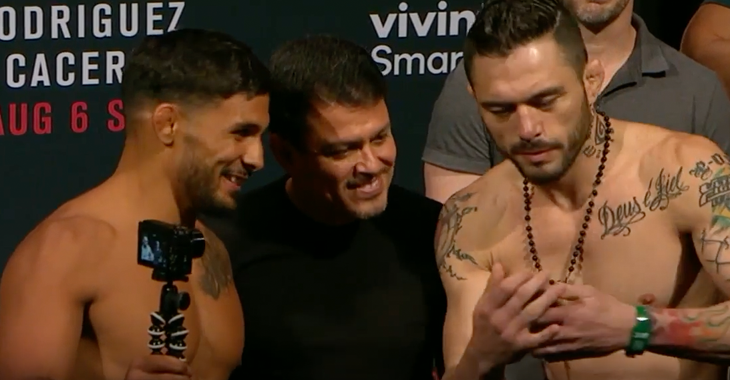 Round one begins and Bermudez lands a jab to start. He lands a kick to the body of Jason. Rony fires back with a kick of his own. Bermudez pumps a double jab. He presses forward and lands a kick to the body. Jason counters with a right hand. Rony with a nice jab. Dennis lands a solid leg kick. He shoots in for a takedown and gets it. Bermudez with a big shot from the top. Rony is searching for an armbar. It is not there. More shots from the top by Dennis. Nice elbows from Bermudez. Jason is split wide open. He is bleeding badly. More shots from Dennis. Jason is defending well but is all sorts of busted up. Round one comes to an end.

Round three begins and Dennis comes forward with a shot to the body. He follows up with a leg kick. Jason lands a knee inside. Another leg kick from Bermudez. And another. Dennis with a nice combination. He scores with another leg kick and then one to the body. Bermudez with a jab. He shoots in but the takedown is not there. Jason is looking for a choke but Dennis defends and they break. Big shots from both fighters. Dennis lands a hook. Bermudez shoots in but Jason is able to switch and wind up in mount. He takes the back of Dennis. Two minutes remain. He lands some big shots from the top. He looks for a rear-naked choke. Bermudez scrambles and winds up on top. Some short shots from the top by Bermudez. Round three comes to an end.