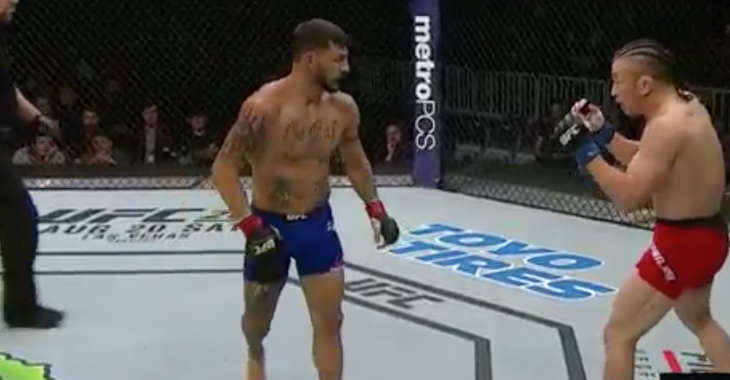 Round one begins and Kawajiri starts things off with back-to-back leg kicks. He misses with a front kick attempt. Kawajiri attempts a spinning back fist but it is not there. Swanson takes the center of the octagon. Kawajiri lands a leg kick. Swanson lands a big right hand. Kawajiri answers with a counter left. A nice right hand scores for Swanson. Kawajiri shoots in for a takedown. Cub defends and lands some elbows. Swanson with a left jab and then a kick to the body. He misses with a spinning high kick. Kawajiri lands a big right and then scores a takedown. He moves to half guard. Kawajiri is looking to pass to side control. He skips that and moves to mount. Cub fights his way back to half guard. Kawajiri moves back in to mount. Cub quickly moves back to half guard. Shots from the top by Kawajiri but Swanson gets back to full guard. Cub is working some heel stomps from the bottom. Round one comes to an end.

Round two begins and Kawajiri lands a leg kick. Cub counters with a right. Kawajiri charges forward with punches. Cub lands a left hand and then a right over the top. Kawajiri shoots in but Cub stuffs the takedown. Kawajiri lands a kick to the body. He misses with a front kick. Cub with a right hand but Kawajiri shoots under for a takedown. Cub sweeps Kawajiri and takes his back. He is looking for a rear-naked choke. It is deep but Kawajiri is somehow able to break free. Cub lets his opponent stand back up. Swanson with an uppercut. Excellent combination from Cub. He lands a big knee but the referee steps in. Kawajiri was down when the big knee landed. Kawajiri is hurt. The doctor is coming in to check on the fighter. Kawajiri says he is good and the fight continues. Cub lands a left and then a right hand. Kawajiri misses with a front kick. Swanson lands a big right and then a combination. Both men are trading punches. Cub with a big left and Kawajiri shoots in for a takedown attempt. Cub is able to defend. Cub lands a leg kick that drops his opponent. Round two comes to an end.

Round three begins and Kawajiri lands a leg kick and then misses with a spinning back fist. Cub is working his jab. He lands a right hand. Cub lands another big right that causes Kawajiri to shoot. The Japanese fighter lands the takedown. Cub is trying to wall-walk but Kawajiri is not having it. Swanson pushes Kawajiri away and immediately pops back up to his feet. Kawajiri continues to search for a takedown and finally gets it. Cub is able to scramble and get back to his feet. Swanson misses with a left but lands a right. He scores with a kick to the body. He leaps forward with a flying knee. Kawajiri drops. Cub is working from top position but the Japanese veteran has his leg. Cub escapes and takes the back of Kawajiri. He is searching for a rear-naked choke. Swanson has both hooks in. Kawajiri is defending well. He scrambles and takes top position. Cub scrambles and get backs to his feet. He lands two shots as round three comes to an end.