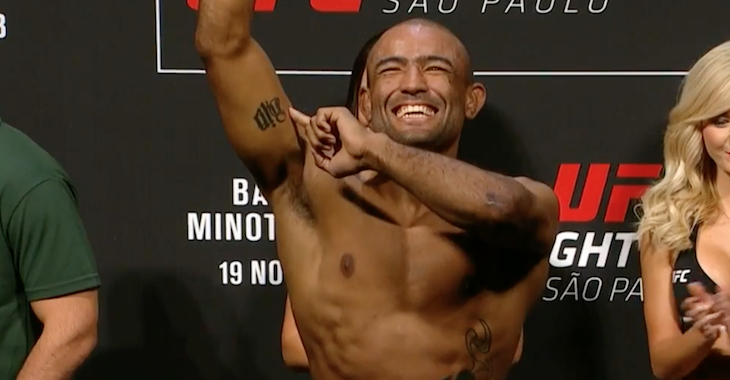 Round one begins and Sergio circles and then misses with a head kick. Zak tries to shoot inside for a takedown attempt but it is not there. Moraes lands a kick to the body and then attempts a spinning back fist that misses the mark. Moraes shoots in and scores a single leg takedown. He begins working from the full guard of Ottow. Zak throws some short shots from his back. Moraes postures up and lands a strike. He moves Zak up against the cage and lands some short shots to the body. Moraes moves to half guard. He looks to isolate an arm but then transitions for some strikes. Ottow is ableot fight his was back to full guard and then lands a nice elbow from the bottom. Not much action here and round one comes to an end with Sergio in top position.

Round two begins and Ottow presses forward with a combination. Moraes returns fire with a straight right hand that lands flush. Ottow continues the forward pressure and back Sergio against the fence. Moraes lands another nice counter right hand. He circles off the cage. Moraes with a combination that ends with a nice left hook. Ottow returns fire with a jab and then a head kick that is partially blocked. Moraes misses with a knee. Ottow respond with a nice combo. The fighters exchange jabs. Moraes lands a front kick to the body of Zak. Ottow with a left jab and then a right behind it. Both men land jabs. Ottow with another nice jab. Moraes shoots in but the takedown is not there. Ottow tries a head kick upstairs but it is blocked. Sergio with a nice right hand. Ottow charges forward and lands a left hook. The fighters trade low kicks. Ottow pressing forward with a jab and then a body kick. Round two comes to an end.

Round three begins and both men trade punches to start. Ottow lands a hard leg kick. He follows up with another. Zak with a jab to the body. Moraes lands a huge counter right hand. Zak is wobbled. Sergio shoots in and scores a takedown. He begins working from full guard. Ottow scrambles and gets back to his feet. He charges forward and the fighters exchange shots. Moraes circles away and Ottow charges after him with a combo. Moraes counters with a right. Ottow lands a nice left and then charges forward with a knee. He has Sergio backing up now. Zak with a low kick. Moraes responds with one of his own. Sergio lands a good right and then a left. Ottow eats it and scores with a big body kick. Moraes lands a combination. Ottow continues to press and fires off two shots and then a leg kick. He goes to the body with a kick. More shots from Ottow. Moraes circles away from the cage. Ottow chases him down and lands a body kick and then some shots. Sergio is swinging wildly. Round three comes to and end.

Trying to take the judges out of it! #UFCSaoPaulo https://t.co/p2dW2ezyLO