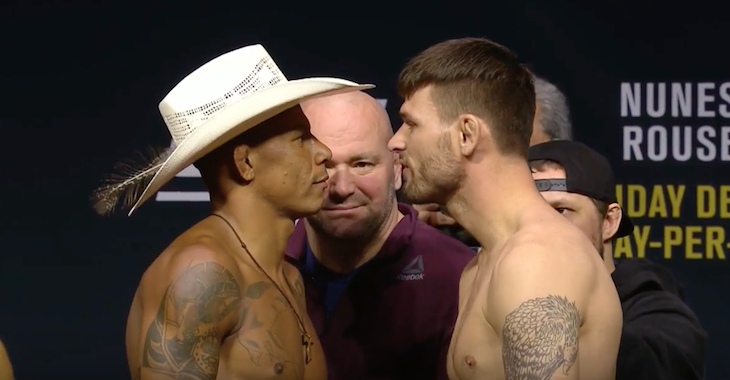 Round one begins and Means immediately attacks the legs of Alex with two hard kicks. Oliveira circles away and then shoots in for a takedown. Means reverses the position and winds up on top. Means with a couple of short strikes but Alex is able to scramble back to his feet. Alex lands a nice combination. He follows that up with a spinning back kick to the body that drops Means. Tim pops back to his feet but Oliveira charges after him. Alex grabs a hold of Means and scores a takedown. He looks to take Tim’s back but Means scrambles and gets back to his feet. The fighters jockey for position against the cage. Means eventually gets the better position and scores a double leg takedown. Good strikes from Means here. He throws a knee to the head of Alex and then another but Oliveira appears to be down. The referee steps in to allow Oliveira to recover from the illegal blows. Oliveira is really hurt bad from those strikes. Unlikely that he doctors will allow him to continue. They don’t and this fight is over. The ruling will be a no-contest.