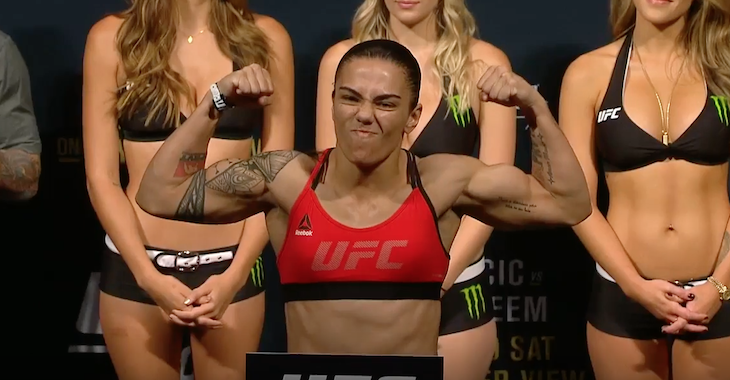 Round one begins and Joanne starts things off with two leg kicks. Jessica comes forward and lands a nice combination followed by a knee. Calderwood replies with a kick to the body but eats a left. The women clinch up and exchange knees. Andrade scores a nice takedown. Joanne does a good job of getting back to here feet but Joanne quickly lifts her up and slams her back down to the canvas. Andrade is working from side control. She lands some nice short shots. Calderwood scrambles and gets back to full guard. Jessica lifts Joanne up and slams her back down to the floor. She begins working some nice ground and pound on Calderwood. Andrade moves to side control. She lands some big shots to the body followed by some nice hammer fists. She is landing some good shots on Calderwood here. Joanne is trying to score a sweep. Joanne gets up but gives up her neck. Andrade sinks in a guillotine choke and this one is over.