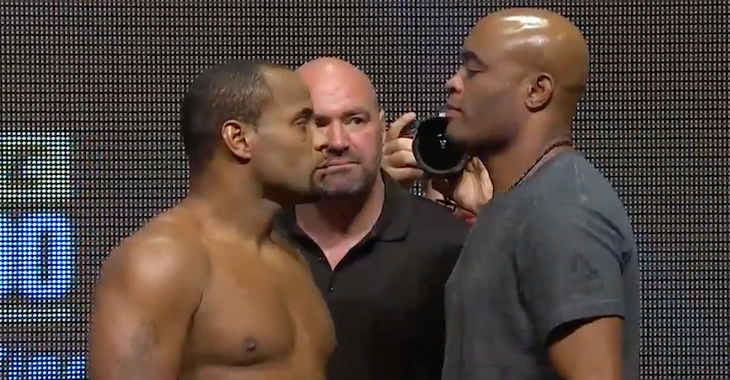 Round one begins and Silva is circling trying to keep Daniel on the outside. Anderson with a leg kick. Cormier is pressing forward. He shoots in for a takedown and gets it. Cormier is working from full guard. Anderson tries to secure an armbar but it is not there. Daniel tries to pass to half guard but Silva will not let him. Cormier presses Anderson against the cage and postures up. He is able to move to half guard and begins landing some short elbows. Anderson does not like those. Silva is doing a decent job of defending. Daniel is finally able to posture up and lands some big punches. Cormier is trying to move in to full mount. Anderson does a good job keeping Daniel in half guard. Thirty seconds remain in round one. Cormier is smothering Anderson but not landing any big strikes.

Round two begins and Silva partially lands a head kick. DC returns fire with a right hand. Anderson with a left hand. DC catches a Silva kick and gets a takedown. He begins working from half guard. He starts landing some big elbows to the head and short shots to the body. Cormier is smothering Anderson with his weight. He is staying heavy on the former middleweight champ. Cormier with some short elbows. He is trying to move to mount. He gives up on the pass and lands some short elbows. Big left hands from Cormier. The referee has stepped in to stand them up. This was a much needed break for Silva who promptly lands a leg kick. Anderson with a knee. He lands a left hand. Cormier misses with a right. Anderson with a good kick to the body. Daniel presses him against the fence. The crowd is not happy about that. Short knees from Cormier to end round two.

Round three begins and Anderson lands a left and then a leg kick. He goes upstairs with a kick. Cormier lands a huge right hand. A nice knee lands for Anderson. Cormier shoots in a gets the takedown. The crowd is displeased with that result. Cormier quickly moves to half guard. He lands some short elbows to the face of Anderson. He continues to smother The Spider. Shots to the body of Silva from Cormier. The crowd wants the ref to stand them up. McCarthy is considering it. The audience is chanting “stand them up”. Daniel lands a couple of good shots from the top. The referee then steps in and stands them up. Two minutes remain. Silva lands a couple of kicks. It looks as if he is trying to setup something. He comes forward and lands a right. Nice kick to the body from Silva. He lands a knee. Cormier grabs him and presses him against the fence. This one is over.