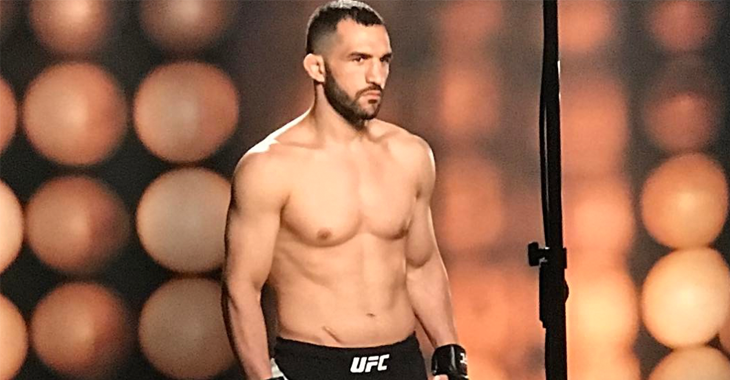 Round one begins and Dias starts off quickly landing a right hand and then a low kick. The fighters clinch up but Dias breaks the hold and circles out. Another good low kick from Dias but it allows Gordon to score a takedown. Hacran scrambles back up to his feet and then breaks free. Gordon throws a side kick. He takes the center of the octagon and then pushes forward with a combination. Dias circles along the fence but Gordon is all over him. Hacran shoots in for a takedown but it is not there. Gordon with a head kick. Dias fires back with a combination. Still, Gordon continues to press the pace. He has Dias on his heels here. Hacran with a nice counter and then a jab. Gordon presses forward like the Terminator and continues to rattle off strikes. Gordon presses Dias against the cage. The fighters break and the horn sounds to end round one.

Round two begins and Gordon leaps in with a left hand. He follows that up with an attempted takedown but Dias is able to defend the shot. The fighters tie up in the clinch. Dias breaks free. He shoots in and scores a takedown. Gordon is trying to scramble back up to his feet and does. Gordon with a big kick to the body followed by a right hand over the top. Dias clinches up and then presses the fight against the cage. Big shots to the body from Gordon. Dias fires back with a beautiful combination. Gordon is busted up after those shots. “Flash” appears to be fine and pushes Dias up along the fence. Big shots from Gordon now. He drops down and scores a takedown. Good ground and pound now. Dias is in all sorts of trouble here. Huge hammer fists from Gordon now. Dias tries to scramble but can’t. More shots from Gordon. He switches to elbows. He moves to full mount and begins dropping down some hammers. This fight is close to being stopped. The horn sounds to end round two.

Round three begins and Gordon immediately brings the fight to Dias. Hacran clinches up and lands a knee. The fighters break and Gordon throws a head kick followed by a combination. He lands a push kick and then presses Dias against the cage. Both men are throwing wild punches now. Dias claims he was poked in the eye and the referee gives him the benefit of the doubt. We restart and Dias is taken to the floor. Gordon moves to half guard and begins working some shots. He is looking to trap the right arm of Dias. More shots from Gordon now. He is looking at the referee to stop the fight. Dias continues to move however. He looks to lock up an armbar. Ten seconds remain. Gordon survives.