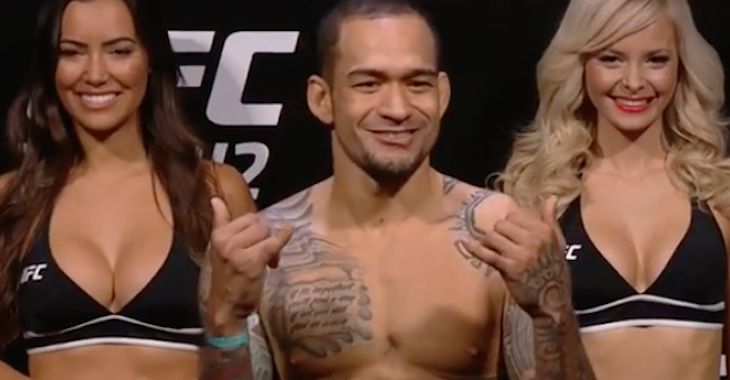 Round one begins and Medeiros circles early while pumping his jab. He lands a nice kick to the body of Silva and then misses with a spinning kick. Silva pressing forward now but Yancy is moving well. Yancy with a left hand but Silva responds with a head kick that partially lands. An accidental head butt appears to stun Silva. Medeiros is instantly on him with punches in bunches. Erick circles off the fence and gets out of harms way. Silva with a nice low kick. Yancy comes forward and just misses with a spinning back fist. He connects with a follow up left hand. Silva appears to be frustrated early on here. Yancy lands another left hand, this time a jab. Silva counters with a left hand of his own and then a nice kick to the body. Medeiros responds with a right hand over the top. The fighters meet in the center of the octagon and Silva lands a hard leg kick. Medeiros circles and then comes forward with a good combination that scores. Erick adjusts his positioning and then fires off a nasty leg kick. He scores with another and then connects with a knee that sends Yancy to the canvas. Medeiros pops right back up to his feet and the horn sounds to end round one.

.@YMedeiros lands some clean shots in round 1!! What an awesome first round!! #UFC212 pic.twitter.com/4hrOnvlkNd

Round two begins and Medeiros scores with an early right hand over the top. Silva circles and then comes forward with a kick to the body. Both men exchange punches to the body. Silva with a left hook and then a hard leg kick. He is beginning to find his range now. Another good kick from Silva. Yancy fires off a low kick of his own and then follows that up with a right hand. Both men miss with lefts and then Erick finds a home for a right hand. Mederios fires back with a right hand but then eats a combination from the Brazilian. Yancy scores with a hard left hook that sends Silva crashing to the canvas. The Hawaiian immediately jumps on Erick with punches and the referee quickly steps in to call a stop to the action.

OHHHHH what a left hook by @YMedeiros!! He drops Silva here in round 2! #UFC212 pic.twitter.com/KrCO6RDeab