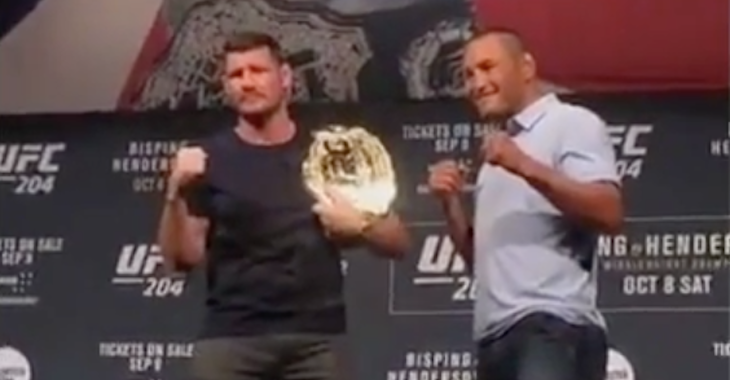 Earlier this year, England’s Michael Bisping shocked the world by flattening Luke Rockhold to win the UFC middleweight crown. From there, logic suggested the Brit would defend his title in a rematch with Rockhold, or against another top-flight middleweight in Ronaldo “Jacare” Souza or Yoel Romero.

Instead, the next middleweight title shot was awarded to a 46-year-old Dan Henderson. The aging vet will take on Bisping in Manchester, England, in the main event of UFC 204 this October 8.

Though Henderson did pull off a fantastic knockout of Hector Lombard in his last bout, his getting the shot can be attributed almost entirely to the fact that he scored one of the most iconic knockouts ever over Bisping back in 2009. While fans were not crazy about the ranking system being thrown out the window for this bout, the UFC clearly believed this rematch’s built-in revenge storyline would sell.

As it turns out, they were correct.

Early this morning, the UFC opened up ticket sales for this highly-anticipated event. 6 minutes later, they were sold out.

Manchester's UFC 204 sold out in just 6 minutes, the promotion announced this AM. Congrats to @bisping. Well deserved.

While many of these tickets were probably scooped up by opportunistic companies who will now resell them at an increased price, this 6-minute sellout is still very impressive. That’s less time than it takes to cook a frozen pizza.

@arielhelwani tickets mostly going to touts, my ticket should have been £125 ended up paying £213. Scandalous #UFC204 #UFC

The evening’s main card will begin at 3:00am local time to accommodate North American audiences, which makes its lightning fast sellout even more impressive.

What do you think of UFC 204’s lineup? Will you be watching the event? Sound off, PENN nation!