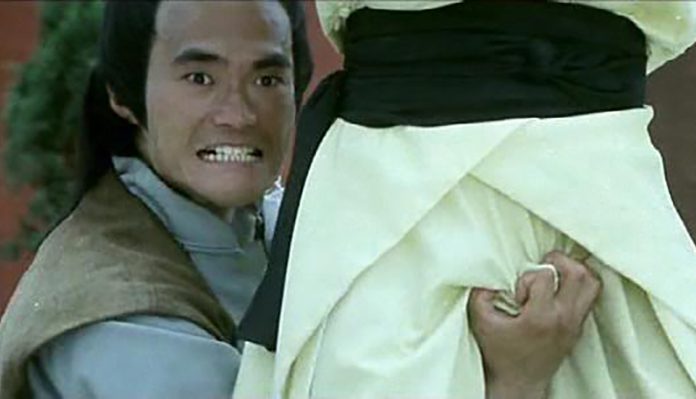 Part four in a series celebrating badassery in film and TV

The mightiest warriors in martial arts movies use their bare fists and feet as deadly weapons. They strike fast and hard, and before you know it, your heart has exploded or your eyeballs are gauged out.

Read on for a tribute to the deadliest kicks, punches and more brutal attacks from martial arts movies. For more visceral action, catch a new episode of Into the Badlands Sundays at 10/9c on AMC. Young Daniel (Ralph Macchio) uses the crane technique he learns from wise sensei Mr. Miyagi (Pat Morita) to deliver a powerful kick to the blonde head of bully extraordinaire Johnny Lawrence (William Zabka). Despite fighting through a seriously injured leg, Daniel-san is able to summon up the strength and defeat Johnny thanks to this one-legged powerhouse move. As the theme song says, he’s the best around. Nothing’s gonna ever keep him down! The Bride (Uma Thurman) learns this deadly move from Pai Mei (Gordon Liu) after begrudgingly earning his respect. Her mastery of the technique comes as a surprise to Bill (David Carradine), since Pai Mei has never taught it to anyone. It’s also Bill’s last thought before dying as The Bride uses the move to make his heart explode and complete her revenge. The five former pupils of the dying master of the Poison Clan practice unique fighting styles — the Centipede, the Scorpion, the Lizard, the Snake, and the Toad – all of which are deadly in their own ways. But the Toad style, described by the master as “immensely strong and immune to nearly any weapon,” allows its user to bend solid metal. While all the venoms are deadly, a strike from the Toad fighter can do some serious damage. Chen Zhen (Bruce Lee) displays several killer moves, including a swift and deadly neck chop, in his quest to avenge the death of his former master. But the most impressive move is the high-flying kick that sends a poor rival through a dojo wall. Maybe the title for this one should’ve been “Foot of Fury.” The villain in this 1977 kung-fu flick practices the Iron Armor technique, making him invincible to harm. Unfortunately he didn’t count on his opponent going for the deadly crotch yank, which proves to be his sole weakness. A cheap move, but an effective one in the end. This brutally violent Hong Kong martial arts flick earned a cult following for its stomach-churning levels of gore. The titular hero possesses superhuman strength that allows him to rip out eyeballs, tear apart limbs and punch holes in stomachs. But the deadliest move is performed by a fighter who smashes the head of an unfortunate opponent with one swift two hand karate chop. (The hilariously gruesome moment earned notoriety after being featured on The Daily Show.) Jean-Claude Van Damme does plenty of damage with his fists in this ‘80s action classic. But the multiple kicks he delivers to the villainous Tong Po (Michel Qissi) in the final battle stand as some of the harshest pain the “Muscles from Brussels” has ever dealt on film. Van Damme is a fighter who always has a leg up on his opponents. After all, the movie isn’t called “Fistboxer.”