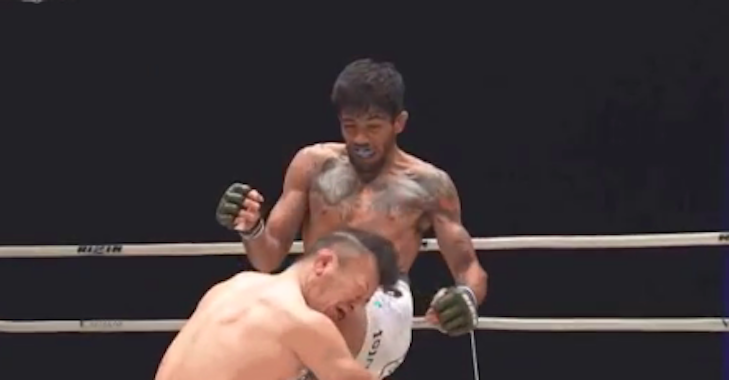 Last night, Rizin Fighting Federation touched down in Fukuoka, Japan with a exciting night of fights (though there were certainly lulls in the action). One of the highlights of the card was the latest appearance of former UFC featherweight contender Tatsuya Kawajiri. Unfortunately for Kawajiri and his fans, however, this return to action went fairly disastrously.

Kawajiri’s opponent in this fight was Brazil’s Gabriel Oliveira. In the bout’s second round, Oliveira planet a rocket-fuelled knee on the side of the Japanese veteran’s face, removing his batteries completely as he did so.

After back-to-back losses to Dennis Bermudez and Cub Swanson, Kawajiri granted a release from his UFC contract. Since his departure from the organization, he has gone 1-2 in the Rizin ring, interspersing a win over fellow UFC veteran Anthony Birchak with stoppage losses to Kron Gracie and now, Gabriel Oliveira.

Do you think Tatsuya Kawajiri would be wise to hang up the gloves, or does he have a few more fights in the tank?