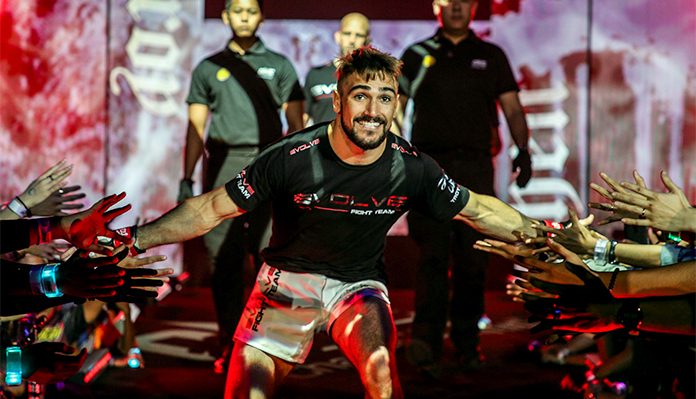 Troy Worthen was in line to ride Doctor Doom’s Fearfall at Universal Studios in Orlando when he got an email that changed his life.

Several weeks prior, he applied to try out for Evolve MMA, a famed fight team based in Singapore — a world away from his Central Florida home. As he waited to get on the ride, he finally heard back.

“I was about to get on the ride and I was looking at my emails and it popped up,” Worthen told BJPENN.com. “It was was like, ‘congratulations, you’ve been invited to the Evolve tryout.’ We went home after that and I started getting ready.”

Worthen, who wrestled at the University of Central Florida, was impressive enough at those tryouts that he earned a spot on the Evolve roster. The next step was moving his entire life from Florida to Singapore — two places that have little more in common than a warm climate.

“I’d never been anywhere in Asia before,” he said of his move. “I’d been to Canada and some places in South America and stuff, but never that side of the world. But for me, I’ve always loved martial arts. I love fighting, I love wrestling, I love competing. So if there was any opportunity for me to continue doing that and not give up on the dream, I was going to take it. It didn’t matter where. It could of been Russia, it could have been anywhere. I was ready to go to Antarctica.”

Shortly after moving to Singapore, Worthen signed with ONE Championship. Since joining the promotion, he’s gone 2-0, defeating Rui Chen and Lei Chen, both by second-round TKO. He feels satisfied knowing he’s doing what he set out to do.

“I’ve been telling people for a long time that I’m one of the best guys in the world,” he said. “I trained with a bunch of UFC fighters, a bunch of Bellator fighters, and I always did well in the rooms with them. So I knew I was at that level. I had just never got the chance to show it. I’m just happy that I finally got the opportunity and I get to show the rest of the world what I’m capable of.”

Worthen will return to the ONE Championship cage this Friday at ONE: King of the Jungle in Singapore — an event that will go down without any fans in the building thanks to growing concerns about the novel coronavirus. Worthen’s dance partner on this unconventional card will be experienced Kiwi veteran Mark Abelardo.

Whether he has fans in the building to cheer him on or not, Worthen intends to make a big statement in his adopted home of Singapore.

“For me, it’s just another fight,” Worthen said of this imminent challenge. “The opponent doesn’t matter. It can be a Brazilian jiu jitsu blackbelt, a Muay Thai world champion, the best boxer I’ve ever seen in my life, it doesn’t really matter. It’s just another body in front of me and another puzzle to figure out.

“He’s got a lot of experience,” Worthen continued, discussing his opponents strengths. “He doesn’t have any quit in him, but it’s my job to go out there and make him quit. I’ve done that to people that have no quit before.”

If Worthen beats Abelardo, he’ll be 3-0 in the ONE bantamweight division, and within distance of matchups with the likes of Kevin Belingon, John Lineker, and the reigning champ Bibiano Fernandes. He welcomes future fights with all the above, and is confident he will wind up ruling over the division by beating them all.

“I wouldn’t be doing this if I didn’t think I was the best in the world,” he said. “So I’m pretty confident that whoever’s holding that title, I’ll take it from him.”

Troy Worthen has already had a very interesting martial arts journey, having moved his entire life to the other side of the planet — all thanks to that fateful email he received in the shadow of Doctor Doom’s Fearfall.

He admits it’s a little surreal at times, but he’s enjoying the ride.

“I saw that ad [for Evolve MMA] tryouts, and it seemed like an impossibility for me to actually get the spot and get paid to train out here and fight for ONE Championship,” Worthen said. “That was all very far away in my imagination, but somehow it became real.”

Catch Troy Worthen in action at ONE: King of the Jungle, which will air on Friday morning in North America, on the ONE Championship Super App, YouTube, and B/R Live, depending on your region.