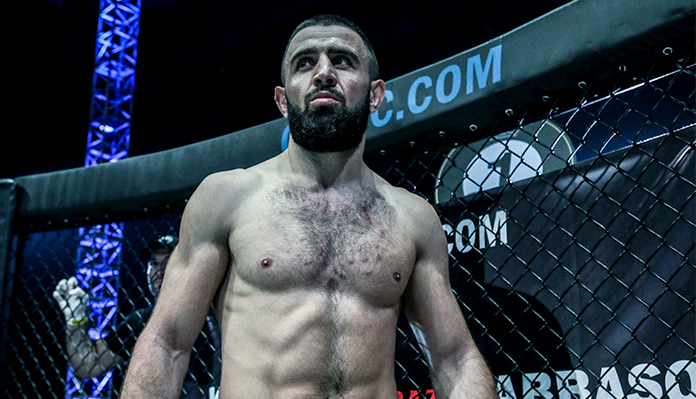 Reigning ONE Welterweight World Champion Kiamrian “Brazen” Abbasov of Novorossiysk, Russia is extremely kind and humble outside of competition, but once the cage door shuts, he turns into a force of destruction.

Abbasov returns to action this Friday night at ONE: Inside the Matrix II, a previously-recorded event in Singapore, scheduled for air on 6 November. “Brazen” will defend his title against highly-touted undefeated American James Nakashima in what should be a high-level affair.

Motivated and hungry for victory, Abbasov is looking to make a statement in what he believes will be an exciting back-and-forth battle.

“I feel great. I’m a hundred percent charged for this fight, and I can’t wait to enter the Circle,” said Abbasov. “I’m ready to go to war and I will do everything for the sake of victory. The result will be from Allah Almighty! I know my strengths, and I’m very hungry and motivated. I can’t wait to satiate the feelings of this hunger. I know at the end of the night, I will still be the champion.” 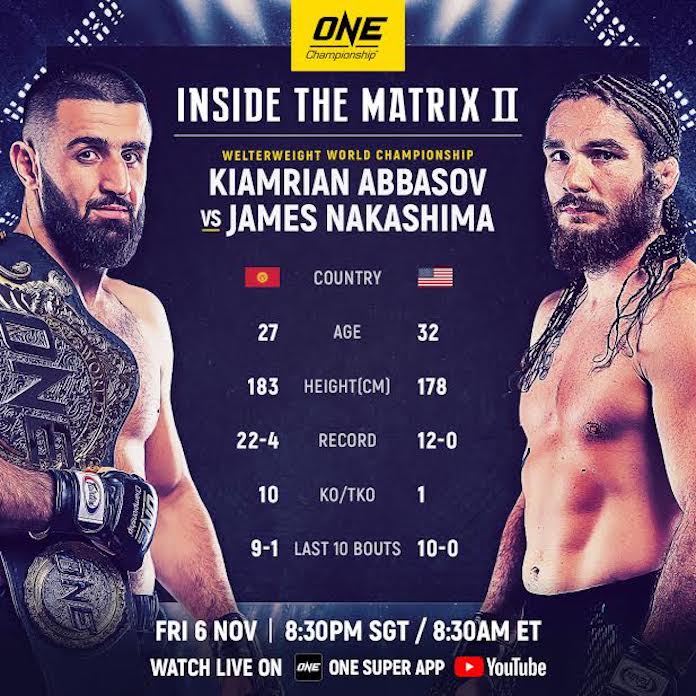 Against Nakashima, Abbasov faces an extremely confident fighter and a Legacy Fighting Alliance Welterweight Champion with an unblemished professional record. Nakashima is a former collegiate wrestler and striking stylist with gold on his mind, and will stop at nothing to achieve his goals.

Abbasov, however, knows exactly the sort of danger a fighter like Nakashima poses, having faced the top talents in his division. He’s done his homework and studied Nakashima’s style, and believes he has the right game plan to achieve victory and retain his title.

“James is a tough guy, and he knows how to wrestle well. But I won’t just stand still in there. I am constantly moving. I’ve worked very hard on my wrestling and grappling over the last few months, so let’s see who’s the better man on fight night,” said Abbasov.

“I have no comment about James. He’s a good fighter, and his record speaks for itself. Being undefeated means he’s a high level fighter, and there is no doubt in my mind that he deserves this fight.”

The Kiamrian Abbasov vs. James Nakashima welterweight showdown serves as the ONE: Inside the Matrix II main event offering, but other compelling martial arts contests will also feature on the show, including a showdown between top-ranked lightweights Pieter Buist and Timofey Nastyukhin.

Making his ONE Championship debut in 2018, losing to Luis Santos by decision, Abbasov has certainly come into his own. He has since been on a tear, railing off four straight victories, including massive wins against former UFC star Yushin “Thunder” Okami, and the always-tough Zebaztian Kadestam to claim the title a year ago.

The Kadestam fight in particular allowed Abbasov to realize a few things within himself.

“In my fight against Zebaztian Kadestam, I was in for a big test. It was a test for me whether I could handle 25 minutes of being in there fighting a real killer. I realized in that fight, that I’m the real killer!” said Abbasov. “My ONE debut didn’t go the way I wanted, but with the Will of Allah Almighty, He gave me all of my strengths, including my weaknesses, and I came back stronger. I always prepare myself the same way, as if I’m facing the strongest fighter ever, no matter who it is. That is the way I approach every fight.”

Do you think Kiamrian Abbasov will retain his title against James Nakashima?