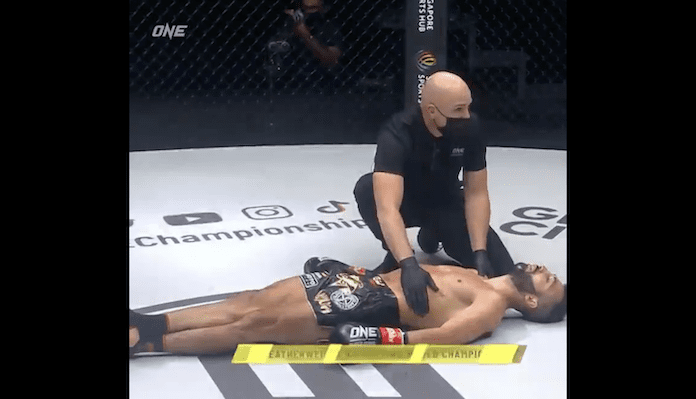 Legendary kickboxer Giorgio Petrosyan was brutally knocked out by a Superbon head kick in ONE Championship on Friday.

Petrosyan fought Superbon for the inaugural ONE Championship featherweight kickboxing world title, and Superbon pulled off the victory with an incredible head kick. It was only the second KO loss of Petrosyan’s entire kickboxing career and it’s his first knockout defeat since 2013, which shows you how hard it is to finish him. Check out the video below.

This was an incredible knockout by Superbon, who won ONE’s featherweight kickboxing title in the process. Superbon was able to catch Petrosyan with the head kick in the second round and put his lights out. Given that Petrosyan is one of the biggest names in the world of kickboxing, this is a massive win on paper for Superbon, who will go on to bigger and greater things following this win. Of course, there is always the chance of a rematch, too.

As for Petrosyan, he is supposed to fight Sayfullakh Khambakhadov in December. However, given that he suffered such a bad knockout loss to Superbon in this fight, there is a chance that he will not be ready to go in December. Either way, despite the loss on Friday, he remains a legend of kickboxing and someone who fans always appreciate stepping into the ring or cage, win, lose, or draw. It will be interesting to see what is next for Petrosyan given that he is now 35 years old. Since he is such a true fighter at heart, he will likely continue to fight, but it’s possible this knockout could signal the downside of his career.

What do you think is next for Giorgio Petrosyan after getting knocked out with a head kick by Superbon?