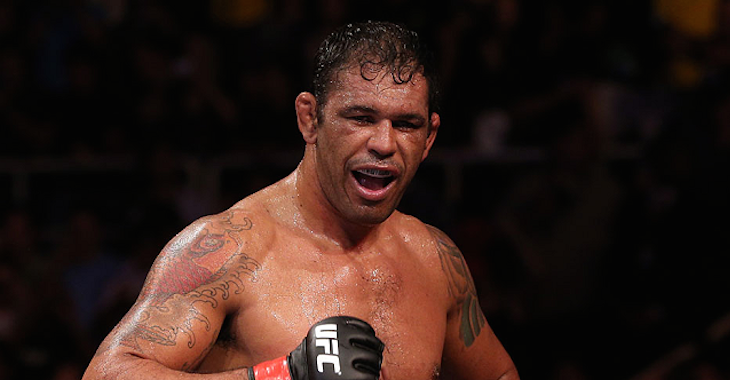 Recently, MMA veteran Vitor Belfort suggested in an interview that the UFC look to create a ‘legends league’ for retired legends of the sport to compete in, so as to satisfy their desire for competition despite being retired.

Belfort revealed that his suggestion to the new UFC owners was not only one that would appease retired UFC legends, but could also bring in more money for the promotion at a time when the new WME-IMG owners have been looking to cut expenses while boosting revenue.

“It makes sense,” Nogueira told MMAjunkie during a launch party for Season 2 of “The 3rd degree,” which will be available on UFC Fight Pass on April 4. “People who are over 40, they’re a little older, and 20-something-year-olds have better physical conditions. But the idea of messing with the rules, making (the fight) shorter – I think when you take away the time, when you take away some types of strikes, you take away from the fight’s characteristics.

“I think from the time you change that, you turn it into a different fight. It’s like Olympic boxing. It was three minutes, then four, then two. It was 10 five-minute rounds, then it was five three-minute ones. It’s a different fight. I think you shouldn’t change the rules, but it’s valid for fighters the same age to fight.” Nogueira himself would likely compete in the legends division, explaining that he misses fighting, as well as training camps.

“I really miss fighting, the adrenaline,” Nogueira said. “Not just of the fight, but the camp. The hardships, the pain I felt on my leg, the bruised arm that wouldn’t stop me, that day-to-day of overcoming adversity. That’s what I miss the most.”