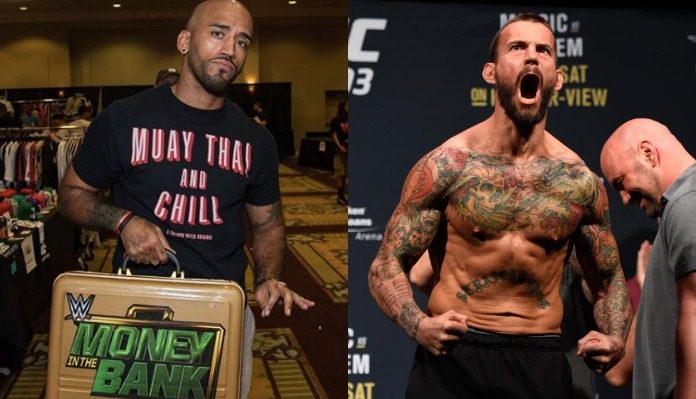 Ever since it was announced that former WWE star CM Punk — nee Phil Brooks — would be taking a second fight in the UFC’s Octagon, Mike Jackson has been angling to be his opponent. It’s an opportunity that Jackson believed was his, all along.

“It wasn’t about getting the fight, because in my mind, it was my fight,” Jackson told BJPenn.com’s Jason Kindschy this week. “You know, Phil, I’ve just known that if [his second UFC fight] were to happen that I would be the guy, because there’s literally no other person that makes sense for this fight outside of myself. The storyline writes itself. I’ve already been in the UFC. We both have in common, a point, in Mickey Gall. I mean, it’s just … the love triangle is there. And you really can’t bring in another person, you can’t.”

“Let’s say you bring in another random 170’er,” Jackson continued. “This is someone that no one knows. So now you have to [wonder] ‘okay, who is CM Punk fighting?’ For me, I’m already… I’m an established member of the media. I have the personality. I have the charisma. Look, he’s literally done nothing. I’ve been the person [promoting this fight]. Now, again, granted, his name alone speaks volumes. As far as who’s been out here sort of on this [promotion], I don’t wanna say marketing, but I’ve been pounding the pavement. We did the promo videos. We’ve done some little shots on social media here and there. I even sent him a Christmas present.”

While Mike Jackson worked hard to get this fight with CM Punk, and has continued to hustle to sell the fight, he says it’ll all be well worth his while in the end. Apparently, he’ll be pocketing a hefty chunk of change for fighting the former pro wrestler.

“I mean, [Punk] brought in half a mil his first fight, I would assume he’s gonna do the same for this one,” Jackson said. “But for me, obviously, I don’t want to fight for like chump change.”

“I made some quite good money doing what I did [in the past],” he continued. “I did like some bare-knuckle fighting a few years back, I got paid very well for that. This is gonna be a large payday for me, and I understand what it is.”

Unsurprisingly, Mike Jackson is hoping a win over CM Punk will open the door to more significant paydays down the road.

“Again, I’m a slow cooker,” he said. “And so I’m looking forward to what this opportunity presents following the fight. That’s what’s most important for me.”

Who do you think will come out on top when the cage door closes on Mike Jackson and CM Punk in Chicago?