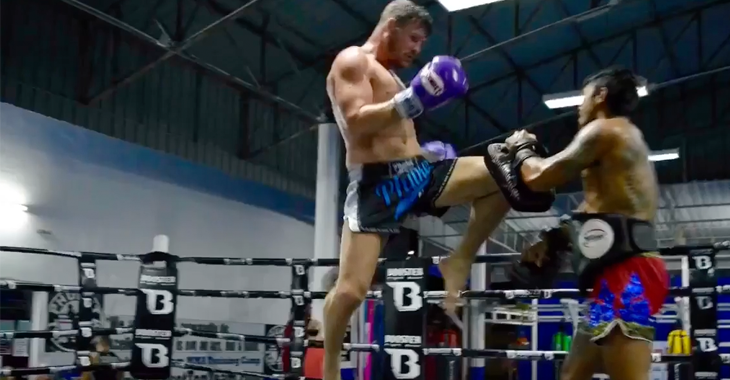 This Saturday, in the main event of UFC 204, UFC middleweight champion Michael Bisping will look to defend his crown against a former foil in Dan Henderson.

In advance of this middleweight title fight, much is being made of Henderson’s age –and rightly so. The American is, after all, the oldest fighter on the UFC roster at 46 years old. It is worth remembering, however, that Bisping is no spring chicken either. Though he’s substantially younger than his upcoming foe, he is one of the middleweight division’s older competitors at 37 years old.

According to Bisping’s head coach Jason Parillo, however, the Brit is finally coming into his own as he closes in on 40.

“Some guys are the best when they’re in their twenties,” Parillo explained on Monday’s episode of The MMA Hour. “A lot of guys peak at different times and Mike’s really come together mentally, physically, and emotionally. He brings it in and he’s a champion now, and I really do believe he’s peaking, and I think he’s going to keep showing that for the next handful of fights.” Given his belief that Bisping is currently peaking, Parillo also believes that Bisping will have a fairly easy time with Henderson.

“I see him touching [Henderson] with whatever he wants,” Parillo explained on the show. “I see him reading Dan, reading his movements. Mike’s been in front of a lot of good fighters, good punchers, good everything. I mean, Luke Rockhold is a beast. He’s a beast, and [Bisping] was reading him like a book. Anderson Silva is a beast and he was reading him like a book. Dan Henderson’s got a different arsenal as far as his leverage and his power, but he also shows a lot more than these other guys do.”

Do you think its possible that Bisping is only just now realizing his zenith as a fighter? Do you believe he’ll defeat Henderson as easily as Parillo expects? Sound off, PENN nation!