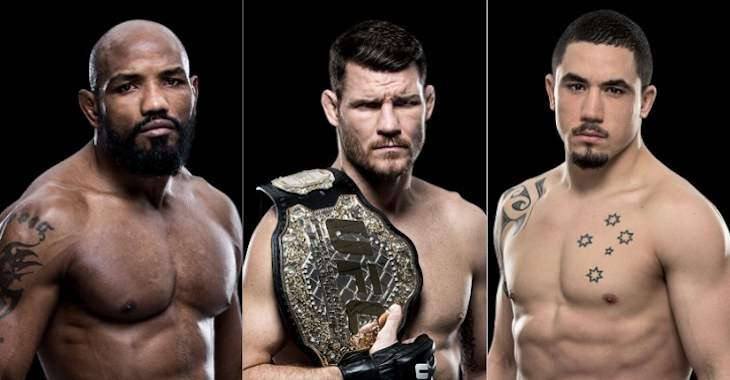 Given the tremendous skill of both fighters, many people are having trouble confidently picking a winner for their fight. Bisping, however, doesn’t seem to have any trouble in this regard.

In a recent interview with ODDSBible, the middleweight champion confidently made his pick for UFC 213’s interim middleweight title fight:

“I think Whittaker will pull it off,” he said. “I know everyone hypes about Romero but he’s a juice-head. He tested positive not too long ago so I’d assume he’s not on anything now as he doesn’t want to get suspended again so the more time that passes, the advantages of those steroids will wear off. Whittaker is young, he’s got good footwork and boxing, and I think he knocks him out in Round 4 or 5.”

While Bisping seems quite confident in a Whittaker win, however, he says this interim title fight doesn’t really matter all that much.

“It doesn’t mean anything; interim belts aren’t worth the leather they’re printed on,” he said. “An interim belt is a joke, I defended the belt in October and I’ve had a bit of a knee issue, but it’s the UFC’s decision, and if they want to do that, then good for them. All it does is solidify who the number one contender is. They’ve got to sell pay-per-views. Dana asked me to fight in July, which I said I couldn’t as I’d had two knee surgeries at the start of the year and the recovery time hasn’t gone to plan. It’s taking longer than expected so he asked did I mind an interim title fight so I said do what you’ve got to do. It doesn’t bother me.”

Who do you think wins UFC 213’s interim title fight? Do you agree with Michael Bisping’s prediction?