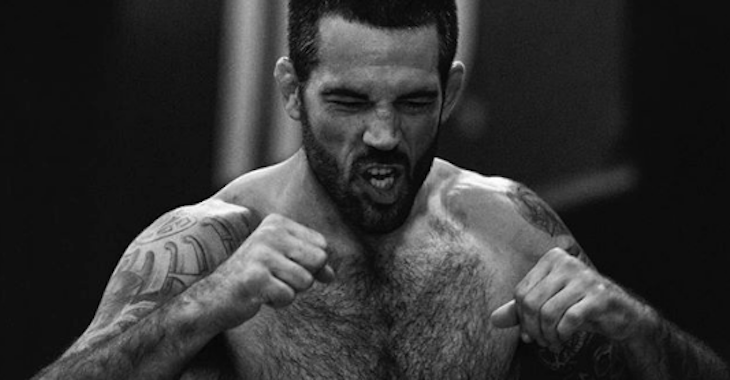 Originally, Matt Brown was expected to retire after his last fight – a brutal, elbow-induced knockout of the veteran Diego Sanchez. Instead, however, Brown has put his retirement plans on hold. The fan favorite welterweight is now scheduled for a scrap with the similarly entertaining Carlos Condit on April 14 at UFC on Fox 29.

Matt Brown explained his decision to hold off on his retirement on a recent episode of MMA Junkie Radio.

“I said [to the UFC], ‘Keep offering fights. If the right thing comes up, I will come right back,’” Brown said.

Brown elaborated, explaining that his family – particularly his kids – were pretty supportive of his choice to keep fighting.

“[The] kids love me fighting,” Brown said. “They were jumping up and down when I told them I was fighting again. They were like, ‘Yes, yes’ and pumping their fists and shadow-boxing. They’re all about it. They want to see me fight, and they want to see me beat people up. So, they’re excited.”

“I think the more adult family – it’s kind of up in the air. We see the pros and the cons. My wife certainly enjoys more time with me. But she likes fighting, too. She likes to see me accomplish what I set out to do. So we’re in it together.”

“It really scared me, the thought of retiring,” Brown added later. “It was a really nerve-wrecking thing. And I had no idea what I was going to do. So I just kind of had to make it official – which turned out not to be official, but at the time it was official. And I’m not so scared. I had lot of opportunities come up. I’ve been doing a lot of work with MusclePharm, specifically.

“… Just a lot of opportunities came up that I guess I just didn’t realize were out there, because I’ve always been so hyper-focused on the fighting. And it just made me feel a lot more comfortable with stepping away from the sport. Just realizing there’s another world out there, and I can handle that, and I could be content with that.”

With his scrap with Condit on the horizon, Brown still isn’t sure what the future holds as far as his fighting career goes.

“A lot of it is going to depend on how I feel throughout the camp,” Brown said. “That’s really the big thing. Specifically, when I announced the retirement, I had this fight with Diego, and my body was hurting real bad and just not getting into shape the way that I had when I was younger. My mindset wasn’t really there to take the kind of abuse that I’ve been taking.

“But it turned out to be an amazing camp. I surrounded myself with the right people, and I felt amazing during the whole camp and amazing during the fight. I’m going to keep the same people around me and assuming things go as well throughout the camp. …

“Irrespective of whether it’s a win or loss, if I feel that good again in camp, I’m going to keep fighting.”

Do you think Matt Brown should continue to fight after his upcoming skirmish with Carlos Condit?