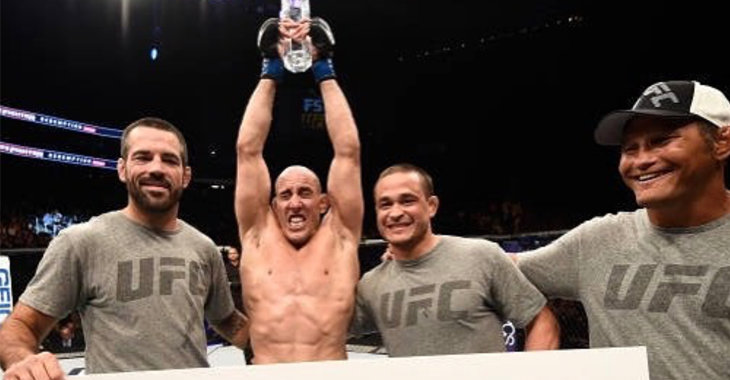 The U.S. Anti-Doping Agency (USADA) has flagged another fighter from the UFC for a potential Anti-Doping Policy violation.

USADA notified the UFC that The Ultimate Fighter 25 winner Jesse Taylor has been flagged and the UFC has removed Taylor from his upcoming scheduled fight. The UFC released the following statement on Wednesday:

The UFC organization was notified today that the U.S. Anti-Doping Agency (USADA) has informed Jesse Taylor of a potential Anti-Doping Policy violation stemming from an out-of-competition sample collected on August 22, 2017. Because of the proximity to Taylor’s upcoming scheduled bout in Sydney, Australia on November 18, 2017, against Belal Muhammad, Taylor has been removed from the card and the UFC is currently seeking a replacement.

USADA, the independent administrator of the UFC Anti-Doping Policy, will handle the results management and appropriate adjudication of this case involving Taylor. Under the UFC Anti-Doping Policy, there is a full and fair legal process that is afforded to all athletes before any sanctions are imposed. Additional information will be provided at the appropriate time as the process moves forward.

Taylor is coming off the biggest win of his career by winning The Ultimate Fighter 25 Finale against fellow finalist Dhiego Lima.

In 2008, Taylor made it to the finals of The Ultimate Fighter season 7. However, a drunken night of rage in Las Vegas ended up getting Taylor kicked off the show. Despite getting kicked off the competition in the TUF series, Taylor got one fight in the UFC but lost his UFC Fight Night 14 fight against C.B. Dollaway and was forced to resume his career outside of the UFC. It took 36 professional fights around the world in various promotions before Taylor got his chance to get back on the TUF “Redemption” season.

Jesse Taylor was slated to fight Belal Muhammad at UFC Fight Night 121, which takes place on November 19 in Sydney, Australia.