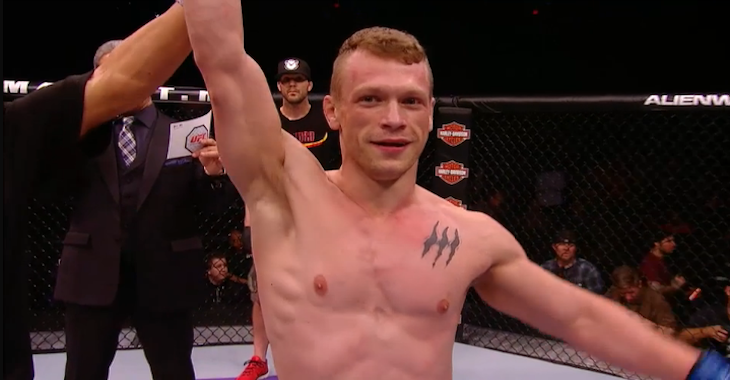 Early on Friday morning, the fighters scheduled to compete at UFC 204 took the scale to weigh in for battle. And while none of these fighters missed weight, one unfortunately didn’t make it to the scale at all. That fighter was talented English bantamweight Ian Entwistle.

When news of Entwistle’s last-minute withdrawal first emerged, the only information available was that he’d taken ill. Whether this illness was related to his weight cut, however, was unknown.

Shortly after the UFC 204 weigh ins, and the announcement of his withdrawal from the card, Entwistle took to Instagram to shine some light on this unfortunate twist.

Had some problems with my weight very early in to the weight cut I slipped in and out of consciousness during the bath was took to hospital administrated I.v and some other drugs the ufc staff was great all the way thru they came to the hospital I said I could still fight and asked if we could do a same day weigh in and he took a big percentage of my purse it seemed positive at the time the ufc spoke to the doctors and they went to consult with there own doctors. I got a phone call from joe silva this morning explaining he couldn't let me fight due to the problem with my kidneys which I have to accept I would like to apologise to the ufc and rob font and everyone that was looking forward to seeing the fight I did the same weight cut and same routine for the last 3 ufc fights and I made weight easy in my last fight and didn't need the weight allowance for my last fight I don't know why it happened so early in the cut. Gutted I won't be on ufc204 I don't think I will ever risk putting my body thru another weight cut but will be finding out more in the upcoming weeks so I am going to have to think about where I go from here as regards fighting again

As the post above explains, Entwistle is unsure that he’ll compete again, given the strain the weight cutting process puts on his body.

The English bantamweight has amassed a 1-2 record over the course of his first three bouts with the UFC, sandwiching a submission win over Anthony Birchak between first-round TKO losses to Dan Hooker and Alejandro Perez. He is 9-3 overall.

Do you think the UFC needs to eliminate weight cutting? Sound off, PENN nation!