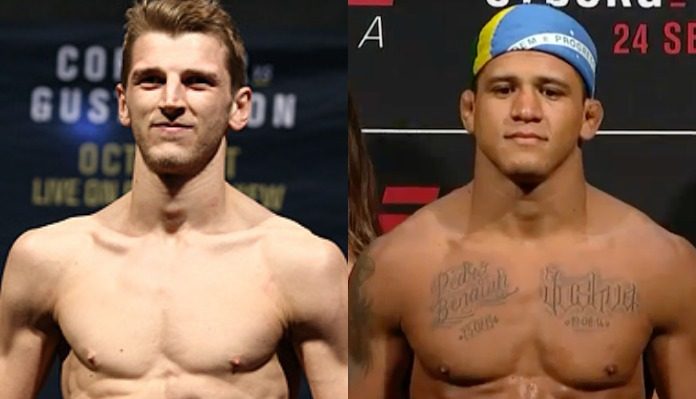 A lightweight scrap between Dan Hooker and Gilbert Burns served as the featured bout of tonight’s UFC 226 Fight Pass prelims.

Dan Hooker (17-7 MMA) entered tonight’s bout on a three fight win streak, his latest being a brutal first-round knockout victory over Jim Miller this past April.

Round one begins and Burns comes forward quickly. He fires off a low kick and then just misses with a spinning back kick. Another low kick from Burns. Hooker throws one of his own but eats a huge right hand from Burns. Dan circles out in an attempt to recover. It appears that he has. He lands a low kick and then a jab. Another low kick from hooker. He leaps in with a combination. Burns eats a low kick and falls to the floor. Hooker follows him there and locks in a choke. Gilbert scrambles and escapes back to his feet. Burns comes forward but Hooker catches him with a right hand. Burns goes down but Dan motions to get back up. Gilbert does just that and Hooker is on him with a big combination. He lands a book hook and Burns is down. This one is all over folks. Impressive stuff from Dan Hooker.