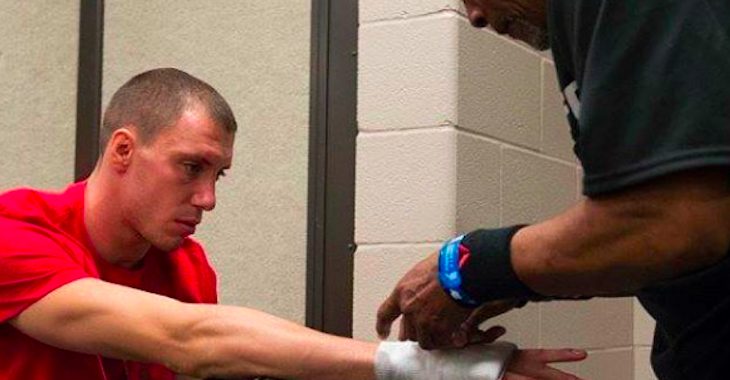 After weeks of trying to find a willing opponent, rising UFC lightweight James Vick has been booked for a scrap with Ireland’s Joe Duffy at UFC 217 this November 4. While Vick is satisfied with this fight, he would have preferred a ranked opponent. Unfortunately, he is finding it nearly impossible to enter the top-10. In his opinion, top-10 fighters are given a little too much slack when it comes to losses, while rising contenders essentially have to move mountains to enter the top-10.

Vick broke it down on the latest episode of BJ Penn Radio:

“Basically all of these [top-10] guys want us killers [outside the top-10] to fight each other,” he said. “It’s nuts how I lose to one guy in the top-10 (Beneil Dariush)– he was ranked like number 7 at the time or something – and I’m not good enough to fight in the top-10. But these guys lose like three or four fights in the top-10 and it’s like they’re grandfathered in and they can take as many losses as they want.” “It just gets old seeing these [top-10] guys lose multiple fights and still be ranked in the top-10,” Vick continued. “I’m not trying to be mean, but I know Michael Johnson recently dropped down [to featherweight], but Michael Johnson was 1-4 in his last five fights, and he was still ranked in the top-10. I mean I understand that he’s fighting the highest level of guys, but at the same time, it’s like when these guys get to the top-10, they can just lose however many fights they want as long as the lose to each other, because they’re grandfathered in. You know, [Anthony] Pettis comes back [to the lightweight division] and beats 40-year-old Jim Miller, and this mother fucker is ranked number-13 in the world? It’s a joke. The dude should not be ranked yet off of one win over Jim Miller. There’s no way he should have got that ranking. I understand he’s a former world champion, whatever, that’s all cool, but I mean, I’ve trolled him on Twitter and didn’t hear a word. These guys act like I’m not big enough for them to fight.”

Do you think James Vick will earn himself a top-10 lightweight opponent with a win over Joe Duffy at UFC 217?