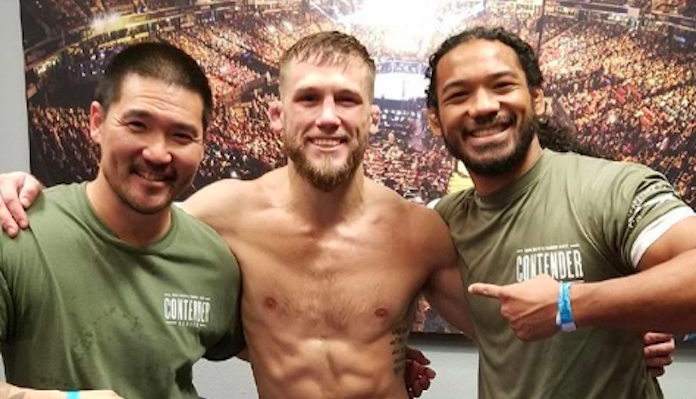 When fighters make their UFC debuts, they’re generally given opponents of similar experience levels. This will not be the case for featherweight prospect Bobby Moffett (13-3). Shortly after earning himself a UFC contract with an impressive D’arce choke win on an August episode of Dana White’s Tuesday Night Contender Series, Moffett was matched up with Chas Skelly (17-3), who is already nine fights into his UFC career. The pair will meet when the UFC returns to Denver, Colorado on November 10.

While this fight with Chas Skelly represents an uncharacteristically tough test for a debuting fighter, Bobby Moffett is looking forward to the challenge.

“I think it’s a really good matchup,” Moffett said on the latest episode of BJPENN.COM Radio. “I think he’s very tough, he’s a seasoned fighter. I think he’s 6-3 [in the UFC]. So he’s a really tough guy and he’s good at what he does — but him and I are pretty similar so what he does is kind of what I do. Some of his losses have come to people that fight similarly to myself and I think I’ll be able to [put] another loss on his record on November 10.”

While Bobby Moffett likes the way he matches up with Chas Skelly, that’s not the only reason he’s excited about the booking. He recognizes that, by giving him such a tough test in his promotional debut, the UFC is showing that they have a lot of faith in his ability. He’s ready to prove them right.

“[The UFC] didn’t give me somebody who is 1-0 or 0-1 [in the UFC] or been in the UFC for two fights so far, something like that, they’re giving me somebody who’s 6-3, who’s a really good fighter,” Moffett said. “He’s the top 30-something in the world at featherweight so, its a big jump for me and I’m looking forward to that. I’m going to go out there and prove to everybody that this is what I was meant to do and this is the shot that I deserve and I’m out here to be the best.”

While Chas Skelly is far and away the toughest opponent Bobby Moffett has been matched up with thus far, that’s not to say he’s never mixed it up with top-level fighters before. Quite the opposite, in fact.

Moffett trains at the MMA Lab in Phoenix, Arizona, one of the finest MMA gyms in the world. At this world-class facility, he shares mat space with fighters like Bryan Barberena, Sean O’Malley, and even former UFC lightweight champion Benson Henderson. He also benefits from the teachings of John Crouch, one of the sport’s premier coaches.

“If I wasn’t in the position that I was in, if I wasn’t with these people, I wouldn’t be in the place where I’m at,” Moffett said of his training at The MMA Lab. “I feel like it was the perfect fit, I mean I just can’t even explain how grateful I am to have gotten into this position, to learn from John Crouch, to train with Ben Henderson and everybody at the gym. I mean its not just them. You know obviously you have Ben, who’s a big example of how to do it and to get to the top and be the best in the world, and then you have all these other fighters that we train with that are also getting there and striving to be the best in the world and they’re great examples too to learn from. Its just been amazing. I love everything about it.”

Suffice to say that, with the help of his teammates of The MMA Lab, Bobby Moffett is confident he can get the job done against Chas Skelly in Denver.

While Bobby Moffett understands that anything can happen in a fight, he’s hoping to close the curtains with one technique in particular: the D’arce choke. It’s the submission that earned him his UFC contract back in August, and one he’s used to finish three other fights in the past.

“Probably with a choke,” he said, sharing his hopes for the fight. “I’m just going to say I’m going to D’Arce choke him in the second round. Let’s hope I get that.”