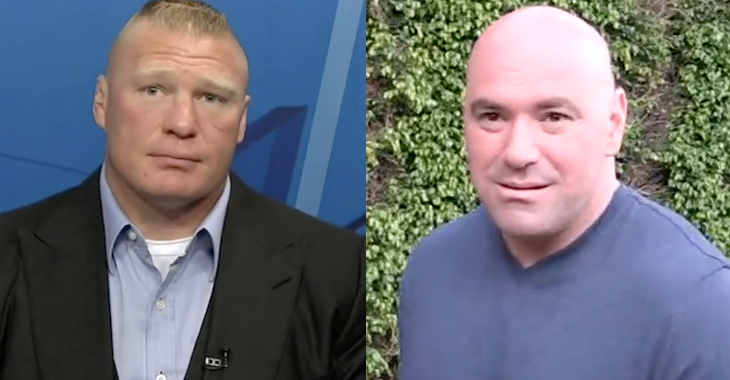 It is no secret that Mark Hunt is livid with the UFC and Brock Lesnar.

USADA notified the UFC that Lesnar was flagged for a potential Anti-Doping Policy violation after he fought Hunt at UFC 200 in July. Lesnar tested positive for the banned substance clomiphene, which is an estrogen blocker often used to counterbalance the testosterone boost caused by steroid use.

Hunt has hired Christina Denning of the Higgs, Fletcher, and Mack firm in San Diego and both of them spoke with BJPenn.com Radio host “Kinch” on Wednesday. Hunt with the help of his attorney plan to slap a lawsuit on both the UFC and Brock Lesnar but have to wait for the outcome of Lesnar’s doping violation hearing.

“We have to wait out right now to file a lawsuit,” Denning stated. “Against either right now would be premature because Brock hasn’t exhausted the process for getting his due process and hearing through the Nevada Athletic Commission and I understand that he has got another continuance. So that hearing is set to go on December 14th so we’ve gotta get confirmation of the violation before we would act on any claims.”

Denning said that they are still exploring all the potential options for their lawsuit claims.

“As far as any specifics of any potential lawsuit, we’re certainly evaluating and we’re still fact gathering through Public Records Act requests and various agencies,” Denning said. “We’re evaluating what all of our potential claims would be aside from Mark’s intent to pursue a change for all fighters. He obviously wants to get some sort of compensation from the UFC or Brock Lesnar for UFC 200.”

Hunt wants to fight again but only on the condition that a provision be made in all future bout agreements. The provision Hunt wants on fight contracts would state that if a competitor is caught cheating by using banned substances, they would forfeit their proceeds from the fight. “I’ve fought my ass off to stay at the top, to reach the top of the sport that I like, which is fighting only to be cheated over and over again. It just sets me back. It sets my brand back,” Hunt stated. “Especially with the sport of fighting, especially with doping. In other sports it’s different. In here, you’re hurting people.”

Hunt said there is a difference between cheating by doping when you’re looking to physically beat up your opponent versus trying to hit a baseball out of a park, which likely anyone would have a hard time arguing with.

Do you think a provision in UFC contracts should be made where a fighter forfeits their purse to their opponent if caught using banned substances? In addition, what do you think Mark Hunt should receive after already fighting Brock Lesnar only to find out after the bout that he tested positive for a banned substance? Should Lesnar’s win be turned to a no contest or a loss? Should Hunt be compensated more than his bout agreement? Sound off in the comment section!