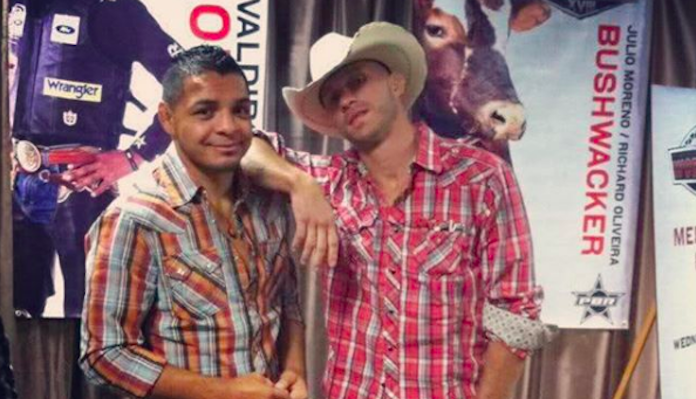 By now you’ve surely heard that UFC welterweight contender Donald “Cowboy” Cerrone has parted ways with his former gym, JacksonWink MMA. Cerrone announced his departure from the gym — which has been anything but amicable — on a recent episode of the Joe Rogan Experience MMA Show. He cited a growing distaste for JacksonWink coach Mike Winkeljohn and the gym’s choice to train his upcoming opponent Mike Perry as reasons.

Speaking on the latest episode of BJPENN.COM Radio, long-time JacksonWink fighter Leonard Garcia, who also happens to be a close friend of Donald Cerrone, gave his take on this very public falling out.

“I watched it all happen, I watched it all unfold,” he said. “I actually got [to JacksonWink] first and brought Cowboy in, and then he just never left. It worked that way and I played out, my career ran its course and then Cowboy really started blowing up. During the time of him blowing up, the gym really started changing. It started becoming a little more money-driven. A couple things were changing. There were kind of alliances being made behind closed doors. Some of the real tight knit people would kind of have meetings. You see long-time members leave, just a bunch of different things. You could kind of see it happening.”

“So eventually it was gonna become more of, I’ll be saying, more of a Mike Winkleljohn’s kind of set up. The way he wanted to run things. Understandably, he’s the one who paid the money to have it that way. At the end of the day you can’t argue with the owner. It’s kind of one of those things. Either you fall in or you fall out.”

“Cowboy decided that he loved Greg [Jackson], he always wanted to stay with Greg, he never wanted to go anywhere, so he was like I’m just gonna kinda just stick around,” Garcia continued. “I’m gonna be here. I’m gonna use Greg to come over to the house and help get me ready for my fights. And [he] was still coming to Jackson’s and using the guys as training partners when he needed them. So I kinda understand their take. I kinda understand the coach’s take. I understand what [they] did, and to me it makes sense what [Mike Winkeljohn] did. He chose Mike Perry over Cowboy because Mike Perry uses him and Cowboy doesn’t, and it’s his gym. That makes sense to me. That happened, great, it worked out that way.”

For Cowboy, Leonard Garcia explained, a big part of the issue is that he hoped to maintain his relationship with JacksonWink coach Greg Jackson — even if he no longer trained at the gym itself. Cowboy was also worried that, if JacksonWink agreed to train Mike Perry, Perry would be learning from coaches that knew everything about him.

“Cowboy really didn’t spend a lot of time there but it became an issue because Cowboy’s telling Greg, well, what if I want to come into this place [again]? At the end of the day fighting is a mental, a really big mental battle,” Leonard Garcia said. “Within yourself. You sit in that corner [between rounds] and you ask yourself questions. Nobody else knows this, but you ask yourself questions when you’re sitting in the corner. When they’re giving you instructions, giving you water, you’re thinking in your head you’re trying to listen to what they’re saying, you’re trying to assess how you were doing in that round, you’re trying to think of everything you did to get prepared, you try to think of different things but so many things are running through your mind. What does [my opponent] know? Why was he confident in this area? Why did he smirk whenever I did this?

“You ask yourself every question in the book,” he continued. “So all these mental things are playing out in your head. Now in preparation, if you’re thinking man, he’s [at the gym] I used to be [at], he’s around all the people that I’ve trained with for years, he’s in there with the coaches that have trained me for all these years, what does he know [about me]? So Cowboy just went to Greg and tells him, how about just for this camp, you’re [not] gonna let him train here? On the simple fact that I don’t want him knowing all these things. But if you can’t, I respectfully understand.”

“It was a number of things,” Garcia added. “Not just out of respect for him, but man, come on. I’ve trusted you guys for this many years. Maybe I’ve told you guys some things I might worry about if you guys tell him and it’s just out of respect. Give me that. Give me at least that. But at the end of the day with anything else, there are so many driving factors in this sport and money’s always been one of them.”

In the end, of course, JacksonWink agreed to train Mike Perry for his fight against Cowboy, while Cowboy was left to continue his carer elsewhere. It was then that Cowboy let loose his statements about the gym’s coaches.

“So when Cowboy said what he said about their coaches and said what he said about everything else, I really felt like man, I kinda felt bad,” Leonard Garcia said. “The coaches, they’ll do what they’ve always done. When it happened with Jon Jones and Rashad, nobody really said anything about it, it kind of flew under the radar and it was over with.”

Leonard Garcia also opened up on Cowboy’s incendiary comments about JacksonWink wrestling coach Chad Smith, which included accusations of drug trafficking. In his eyes, Cowboy wouldn’t have made these comments if he didn’t believe they were true.

“The coach that’s in there right now, the wrestling coach, I have no idea,” Leonard Garcia said. “I’ve never met him, don’t know anything about him. I know he’s a good friend with Diego Sanchez. I will say this about Cowboy, Cowboy talks trash about a lot of things but the good thing is Cowboy’s just a super honest guy. He gets in trouble for calling it like it is. He doesn’t have a filter, so he says stuff sometimes that gets him in trouble. For instance, on that podcast, what did the idiot say? That he transported drugs into somewhere allegedly? It’s like come on, dude. You can’t say stuff like that. But he’s honest.”

“If he said something, especially something like that, an accusation or something, he usually won’t say it unless there’s concrete evidence. So I certainly believe he has concrete evidence to support what he said. Do I know that that happened? Absolutely not. So I won’t even say that I know for sure or yes, no, maybe. I personally don’t even know the guy.”

To get Leonard Garcia’s full take on the growing rift between Donald “Cowboy” Cerrone and JacksonWink MMA, check out the latest episode of BJPENN.COM Radio.