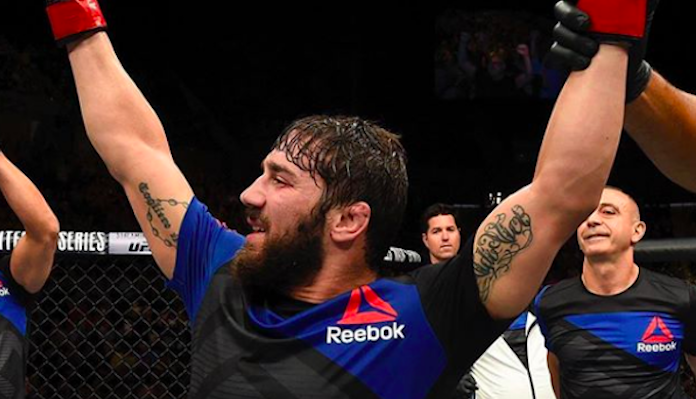 Jimmie Rivera suffered a devastating 33-second knockout loss to Marlon Moraes at June’s UFC Fight Night event in Utica. The loss snapped a twenty-fight win streak for “El Terror” and came at a great cost. Had he defeated Moraes, Rivera most likely would have been granted the next title shot at T.J. Dillashaw, but after the loss, it was back to the drawing board for the New Jersey native.

Rivera decided it was time to return to the octagon just three months after the loss. Jimmie took on fan favourite John Dodson at September’s UFC 228 in Dallas. The quick turnaround had many fans and analysts feeling that Rivera was coming back too soon, especially given the way he lost to Moraes.

“You know what, no. I just kind of look back at what I needed to fix in my personal life, in my training camp, etc. and literally the following week it was getting cleared by doctors so I could fight. A week after that, we took the John Dodson fight, and that was it. We focused on the next thing,” Rivera said to BJPENN radio. “I’ve been saying that and I tell my students and lead by example, it’s not what happens when you fall off the horse, it’s what you do when you’re after it, and if you’re gonna get back on and keep going forward. I try to be an example of that. That’s exactly it. Sometimes shit happens. You fall off, you get right back on, and you try again.”

Rivera vs. Dodson got promoted to the main card where many fans were happy to see the fight. However, the fight did not appear to live up to the expectations of the fans inside the American Airlines Center as many in attendance decided to boo the fight.

For Rivera, however, he doesn’t believe the fight was actually boring and more of a technical fight between two of the best in the bantamweight division.

“It played out exactly how I thought it was going to play out. I said it’s either going to be a boring fight for a casual fan or an exciting fight,” added Rivera. “A casual fan wants to see a brawl, but when you get someone that moves and doesn’t want to stay in one spot, it’s a hard fight and it’s a lot more technical. That’s what the fight was, it was technical and I was very happy about the outcome. I know the casual fan wasn’t, but the MMA fan was. They were very impressed, so it is what it is. I just had to fight like that to get the win and walk out of the octagon with my handheld raised.”

Getting the win is exactly what Rivera did and for him, it is more about winning and getting his win bonus than putting on a show for the fans.

“I mean, at the end of the day, it’s not like we’re trying to impress the fans,” added Rivera.

While the win is what Rivera got and getting the win was huge for his ranking and his confidence. Looking back he still doesn’t seem to care that some fans thought it was a boring fight.

“No, it doesn’t bother me at all. It is what it is,” he said. “If a guy doesn’t want to engage, if they want to throw a punch or two moves and stay to the outside fight it’s not much like I said, you can do.”

Who would you like to see Rivera fight next?