Former UFC and Bellator lightweight champion Eddie Alvarez will be welcomed to ONE Championship in the most exciting way possible, as he’s set to compete in the promotion’s anticipated Lightweight Grand Prix in 2019.

The details of this Lightweight Grand Prix are still somewhat scarce, yet Alvarez believes the first round of the tournament will occur in March 31, when ONE Championship makes its anticipated debut in Tokyo, Japan.

“They want to have a coming out party in Tokyo, I believe,” Alvarez said on the latest episode of BJPENN Radio. “It’s in Japan and it’s going to be in March, the end of March. That’ll be the first round of the tournament, I believe.”

Over the course of this Lightweight Grand Prix, it’s possible that Eddie Alvarez crosses paths with fearsome ONE Championship lightweights such as Saygid Guseyn Arslanaliev, Ev Ting, Amir Khan, and Timofey Nastyukhin. Yet it’s arguable that none of the matchups available to Alvarez hold a candle to a potential rematch with former ONE lightweight king Shinya Aoki.

Alvarez and Aoki have met twice previously, winning one fight apiece, and the buzz surrounding a potential tie-breaker in the ONE cage has been loud.

That being said, Alvarez isn’t sure this is actually the toughest fight for him.

“I mean there’s a number of fighters in the division,” he said. “There’s actually guys I feel like are harder and better match ups than Shinya, but I’d imagine that Shinya keeps winning that we’re going to cross paths. But I’m looking forward to everyone. I’ve always been of the mind that just because someone is more popular, doesn’t make them a better fighter. I mean, [earlier in my career] I’ve always been the less popular guy, but in my heart I knew that I could be the best in the world anywhere. So I’m sure there’s guys just like that here that are very unpopular and very good at fighting and I’m looking forward to running into them.” 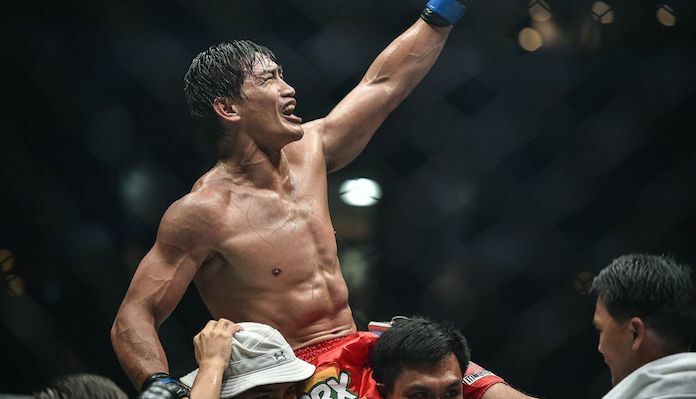 Another exciting option for Eddie Alvarez in this Lightweight Grand Prix is a showdown with new ONE lightweight champ Eduard Folayang, who captured the vacant title with a thrilling defeat of Amir Khan late last month.

From the sounds of it, Alvarez is quite impressed by the champ Folayang.

Whatever the case, Eddie Alvarez is confident he possesses the skill and experience to topple anyone he meets in the tournament — be it Aoki, Folayang, or somebody else.

“I’ve watched a number of the guys and I feel very good about my chances of beating everyone in the tournament,” he said. “I’m a tournament fighter so I’m not so worried about the opponents and I never am. It’s more about me coming out at my best come March and competing at my highest level. When I do that, I can beat any lightweight in the world on any night. I know that about myself and come March, I just want to be the best version of myself possible and fans will see.”

Needless to say, Alvarez isn’t too worried about his path through the tournament. He says he’s happy to fight whoever ONE matches him up with. His mission is to raze the crowd in front of him until the lightweight belt is wrapped around his waist.

“Whoever ONE tells me to fight, I’ll fight,” he said. “I literally have no preference. I’m here for one reason and that’s to get the ONE Championship world title. I don’t care who’s in my path or who’s in the way. I’ll get that belt and I would have achieved every single belt from every major organization. That’s what my eye’s on now, my eye’s just on that gold and whoever’s in the path of that, God bless them.”

“ONE can line them up and I’ll knock them down,” he continued. “I’ll be one track minded, I’ll have complete blinders on. When I enter a tournament it’s mostly about me just bringing it, and bringing it at a real high pace, and getting in my opponent’s faces, and most of the time they fall.”

While tournaments can be fairly chaotic, Eddie Alvarez has plenty of experience fighting in this format, having done so previously under the Bellator and Dream banners. He has learned how to embrace the chaos of a tournament — even thrive in it.

“I’m excited to get back in there and just be my old self, get inside a cage and just be super unpredictable,” he said. “Get in my opponent’s faces and leave it up to the fight Gods to decide the winner. I’ve always done things that way. This sport’s full of uncertainty and I’ve learned to appreciate the uncertainty and I guess go along with it and not fight it. I just like to be relaxed in there, and be my true self and go after my opponents very viciously. I appreciate the following and the support that I have always got from them and let’s do it. Let’s go get this world title.”

How do you think Eddie Alvarez will perform in the ONE Lightweight Grand Prix?