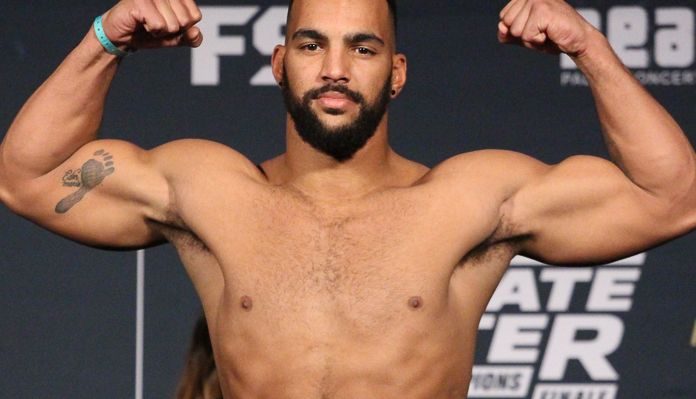 Devin Clark’s path to the UFC involved getting noticed on the reality show ‘Dana White Looking for a Fight,’ where he won the RFA Light Heavyweight Championship. Since that moment where White announced he was going to sign the South Dakota native, Clark has had aspirations to capture the UFC light heavyweight title.

Clark lost his first fight in the UFC, but then went on a roll and won back-to-back fights by unanimous decision before getting his toughest test in Jan Blachowicz. Unfortunately, Clark got submitted by Blachowicz in this fight, but he’s since rebounded with a decision win over Mike Rodriguez, which occurred at UFC 223 in April.

Since his win over Rodriguez, Clark has not fought. He wanted to fight this summer, but that plan didn’t come together. The good news is that he’s now finally booked for a return to the cage at UFC 231 in December, where he’ll take on streaking Austrian star Aleksandar Rakic.

“I really don’t know [why I haven’t fought since April],” Devin Clark said on the latest episode of BJPENN.COM Radio. “The UFC, they do what they want to do and seem to have a long-term plan for everybody. However that worked out for their planning, obviously I wanted to fight sooner. I wanted to fight this summer. By the time I do fight in December, it will be almost about eight months, and the way I learned to look at it, instead of being neglected or something, I look at it that it made me more hungry. If you starve a dog you are going to get an angry dog. It definitely helped me grow, the time off. I had plenty of time to work on things, so I think it turned out to be a good deal.”

As Devin Clarks says, his prolonged layoff has made him hungrier and more ferocious. When he finally steps back into the cage, he’s looking to do some serious damage to his foe.

“I want to kill this guy,” he said. “I have never met him, never even talked to him but for some reason, I want to kill this guy. I don’t know if it is because of the time off or what. I don’t go into too many fights angry or targeting the opponent personally, it’s more of a sport type deal. But personally, I want to hurt this guy and right or wrong that is how I am looking at this fight.”

Devin Clark knows this fight with Rakic is a big opportunity. With a win, he could soon be fighting ranked opponents and big names, but with a loss, he’ll once again have to claw his way back up the ladder.

“I almost have to make a big statement here,” Devin Clark said. “They gave me a big opportunity against Jan to prove myself and I kind of blew that. I made a mental error and got submitted by him, even though he is really good, but I felt that I could have won that fight. Mental judgement and fatigue got me there. Yeah, I got to make a big statement at this fight and move on from there.”

Who do you think will win the Devin Clark vs. Aleksandar Rakic fight at UFC 231?