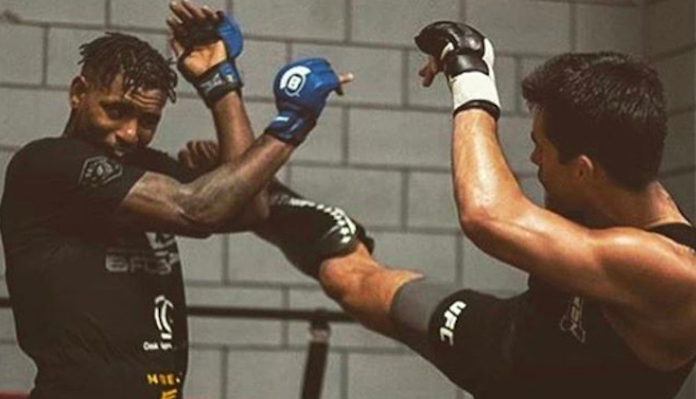 Speaking on the latest episode of BJPENN.COM Radio, Darrion Caldwell heaped praised on Dominick Cruz and assured that he — and nobody else — deserves the next shot at reigning UFC bantamweight champion TJ Dillashaw.

In fact, Caldwell expects Cruz to battle Dillashaw before the year is out, and reclaim the title he once guarded so ferociously.

“If [Cruz] doesn’t get immediate title shot then I don’t know what this sport is all about,” Caldwell said on the show.

“He’s about as good as he’s ever been or looked since I’ve been here [at Alliance MMA],” he continued. “He’s shown that. I’m expecting him to be fighting TJ Dillashaw and being a world champion by the end of the year as well.”

While Darrion Caldwell feels that it’s a no-brainer for Dominick Cruz to get the next crack at TJ Dillashaw, Dillashaw himself has been lukewarm to the idea. Despite the fact that Cruz was the last man to beat Dillashaw, Dillashaw would like to see the former champ get a few wins before he fights for the title again.

“The one thing I have against Cruz is that he feels entitled to this rematch, he feels entitled to this title fight,” Dillashaw recently said on the ‘Below the Belt’ podcast (transcribed by Damon Martin for MMANytt). “You haven’t been active. If you had been active, sure you deserve the title match. But you want to be sidelined for two years saying that you’re ‘injured’ and then all of a sudden I’m looking for a contender and you want to be like ‘I’m ready’.

“You just want to pass murderer’s row up, you don’t want to have to challenge yourself whatsoever. To me it’s a little p–sy move.”

Darrion Caldwell returns to the Bellator cage in the main event of Bellator 204 on August 17, where he’ll battle UFC veteran Noad Lahat in the featherweight division.

“He poses a lot of challenges, you know,” Caldwell said of this Bellator 204 matchup with Lahat. “He’s my first fight back up to 145 [pounds]. Obviously the strength is going to be different … I haven’t matched up with like a judo guy [like him].”

“He’s a guy like me in a sense where he likes to take guys down and choke ’em out on top, so it’s going to be a battle.”