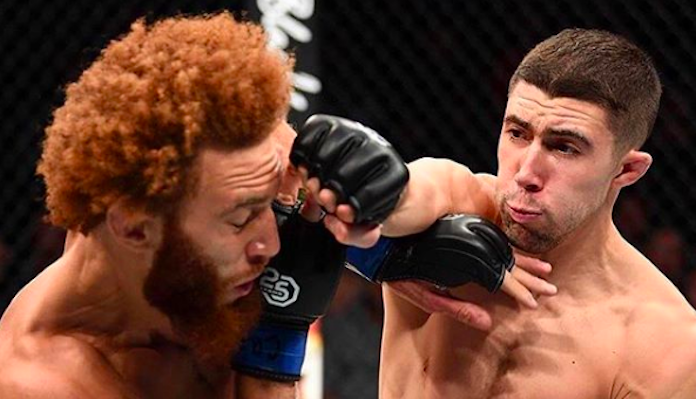 Mike Trizano answered all the doubters last weekend when he defeated Luis Pena at the UFC’s 25th-anniversary show in Denver, Colorado.

Trizano won season 27 of The Ultimate Fighter. Almost immediately after he was faced with some what-ifs. Mainly if “Violent Bob Ross” didn’t get injured, would Trizano still have won the show? Al the doubters got their answer last Saturday night.

It is going to be interesting to see how the matchmakers book Trizano moving forward. He is only 26 years old and boasts an unbeaten record of 8-0. He is a Bellator MMA vet as well. Trizano fought Mike Otwell at Bellator 186 in November of 2017. He easily defeated Otwell via submission in the second round. Why didn’t the Viacom owned promotion snag this future TUF winner up to a long-term deal?

“They definitely were looking to,” Trizano said when asked if Bellator tried to sign him to a multi-fight contract. “I got great coaches and a great team behind me. We just decided to do a one-fight deal just to see what was going on.

“I was still young in my career, it’s not like I had 30 fights and it’s getting tough to get into the UFC,” he continued. “I’m still young so why not leave my options open. So i just did a one fight deal it went well and it couldn’t have worked out any better. A week later they came out with the fly for open casting of TUF. I just took it and ran with it.”

Indeed he did, all the way to a UFC contract. It’s about seizing the day and being ready when you are called upon, according to Trizano. Make no mistake about “The Lone Wolf” will be ready to take full advantage of whatever situation presents itself. And he will have absolutely no regrets whatsoever.

“I’m big on taking every opportunity that I can,” explained Trizano. “If something presents itself I’m not going to pass it up because I don’t want to have any regret you know.”

Who do you want to see Mike Trizano fight next?