Earlier this month, in the main event of Superior Challenge 15 in Sweden, UFC and Ultimate Fighter veteran Dylan Andrews knocked out Papy Abedi with a thunderous, second-round head-kick. It was his second knockout defeat of the Swedish fighter.

With this win, Andrews rebounded from a three-fight losing streak, a disappointing release from the UFC, and a hiatus of almost two years. Yet the win was important to the Australia-based Kiwi for another reason. It represented his rekindled love for the sport of MMA – a love that devolved into downright hatred around the time of his UFC release.

“No disrespect to my last three opponents [in the UFC], but I should have won those fights,” Andrews said on the latest edition of BJ Penn Radio. “I lost the love for MMA. That third fight for me – and even my first fight with Papy – it started going down hill. I don’t know what happened. I just lost the love, man. I lost the love to compete. I didn’t appreciate what I had. I was missing home too much, I was missing family. I just wasn’t doing what I needed to do to compete at the highest level. So I took that time away to sort of re-evaluate, because I despised MMA, you know? I’d given my life to it for so long, and after a year and a half, two years, I’d lost everything. I’d lost everything I had worked for. I was cut from the UFC. I was blaming people, I was miserable… It was just a rough time man. I hated the sport. And ultimately, the sport made me – it made me a better person than I was. But not only did it make me, it broke me too. So that was my emotional state. I left it. I wanted nothing to do with MMA. I was so bitter towards it.” 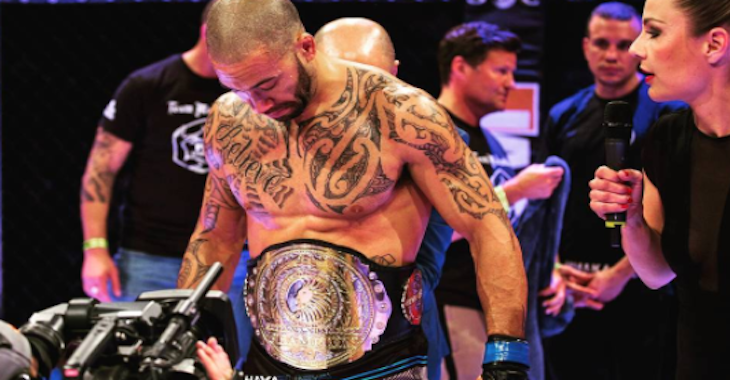 Ultimately, however, Andrews was able to rediscover his love for the sport. He explained that he was able to do so on a visit to the United States, when he attended a service for fellow Ultimate Fighter veteran Josh Samman, who tragically passed away in October of 2015.

“The reason I sort of found the love again, was I went to the [service] of a friend of mine who passed away, Josh Samman,” he said.

“Josh had a big impact on the sport, and he articulated it in a way that I could relate to.”

“They did a last tribute show for him in Florida, so I want back for that, which was around March this year,” he continued. “I met up with a good friend of mine who was also on [The Ultimate Fighter], Clint Hester, and I stayed with him, and we started training together [in Atlanta]. I started working with his wrestling coach, John Laboranti, and also did some work with [UFC light heavyweight] Ovince St. Preux. And there were just little moments in the training session where I was like ‘Damn man, this is it, this is what you’re supposed to be doing, this is what really makes me happy.’ So I came back from Atlanta revitalized from that. About three weeks later, I booked the title fight in Sweden and flew straight back to Atlanta and just grinded man.”

The fruits of Andrews’ return to the grind can be seen below:

LAWD. Dylan Andrews brutally KO's Papy Abedi at Superior Challenge 15 today. This was a rematch of their UFC fight from 2013. pic.twitter.com/fgtxak5iNg

Having rediscovered his love for the sport, and picked up an epic comeback win, Dylan Andrews now hopes to return to the UFC for the promotion’s June 11 show in Auckland, New Zealand.

If you’d like to see Dylan Andrews back in the Octagon, let the UFC know on social media!