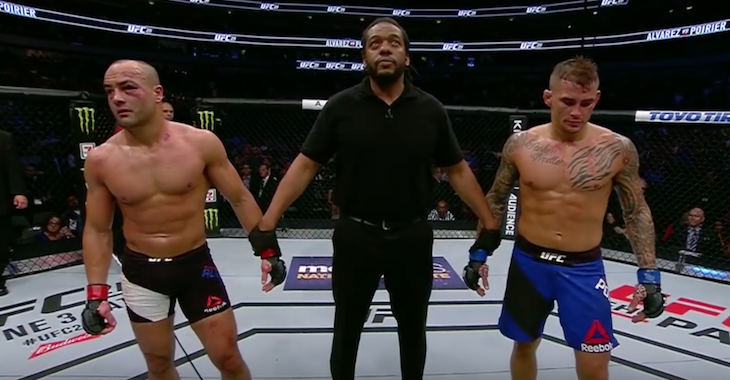 Back in May, UFC lightweight contender Dustin Poirier very nearly picked up the biggest win of his career, as he had former lightweight champion Eddie Alvarez on spaghetti legs during their UFC 211 undercard scrap. Regrettably, Poirier was then cracked with a salvo of illegal knees. When he was unable to continue, the bout was ruled a no contest.

Unsurprisingly, Poirier then set his sights on a rematch with Alvarez, and for a time, it looked like he’d get one. Ultimately, however, the UFC opted to pit Alvarez against breakthrough star Justin Gaethje, leaving Poirier without a dance partner

“You know I can’t keep living in the past with that,” he said. “What sucks is that I was putting together one of my best performances. You know my training camp had gone great and I was showcasing all of my skills and it just kind of gets washed away. You know beating the number three guy, one fight removed from being the former champion. Whooping him, you know, finessing him, and then we just don’t talk about it like it never happened because some foul shit happened like that. It all just gets swept under the rug.”

“You know from my side, from his side, from everybody outside who wants to say something about that fight, the only thing that matters to me is that me and Eddie both know that I was going to win that fight,” he continued. “That’s it. It is forever man. He and I will know the truth about that fight. I look at it as a win.”

Poirier then weighed in on his standing in the lightweight division, and whether a title shot might materialize in 2018.

“Yeah, that is the goal and that is the game plan,” he said. “It just sucks that I beat the guy (Alvarez) up for two rounds and then I got kneed in the back of the head and nobody acknowledges the performance or me beating the number three guy. It did nothing for my ranking and for my next fight. So it kind of sucks to have it looked over like that but hey, I have more where that came from. “

“You know, I think a win over Pettis would move me up for sure,” he said. “Eddie got a title shot with a win over Pettis so we will see what happens man. That would make it two former champions in a row that I beat. Because like I said, I look at the Eddie fight as a win. He knows and I know that I won. So if I beat Anthony that is two in a row. Beating two former champs should speak for itself.”

Would you like to see Dustin Poirier and Eddie Alvarez rematch?