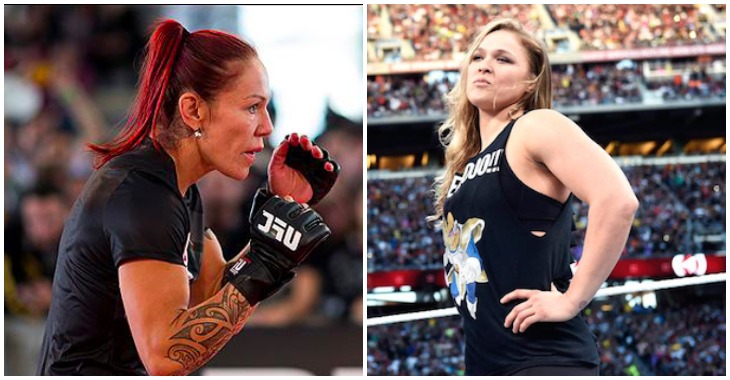 Late last month, UFC featherweight star Cris “Cyborg” Justino challenged former bantamweight champ and long-time rival Ronda Rousey to a showdown in the WWE ring. The featherweight did so on Twitter, after footage of her drilling pro wrestling maneuvers with wrestler Gabi Castrovinci surfaced on the web.

I have my tagteam partner @RaquelTNA now all @RondaRousey needs is one @wwe and we can #RoyalRumble #wwe pic.twitter.com/LjdxRM4iGp

Speaking to BJPenn.com, Cyborg has now offered some clarification on this callout of Rousey, explaining that she believes a pro wrestling bout is the only way she’ll be able to fight her rival at this stage, and that ultimately, it’s all about entertaining the fans.

“I love the idea of entertaining my fans,” she said. “Everyone wanted us to fight but for whatever reason the UFC was unable to put it together. If the WWE can put that match together I know a lot of fans who would like to see me get in the ring with her. I would accept the challenge to get rowdy, it would be satisfying to finally get to bodyslam her inside the WrestleMania ring.”

When we last saw Cyborg in action, she bludgeoned Lina Lansberg to a second round TKO. Prior to that, she mauled Leslie Smith to a first-round TKO in her long-awaited UFC debut.

Rousey, on the other hand, is in the midst of a pretty severe rough patch. Back in 2015, she had the UFC women’s bantamweight crown knocked off her head by a second round Holly Holm head kick. After more than a year away from the sport, she then returned, only to be brutalized by reigning bantamweight queen Amanda Nunes in less than a minute. With these two decisive losses, it’s looking increasingly doubtful that Rousey steps back into the cage – hence Cyborg’s hope to meet her in the squared-circle.

Would you be interested in a pro wrestling showdown between Cyborg and Ronda Rousey? Sound off, PENN Nation!