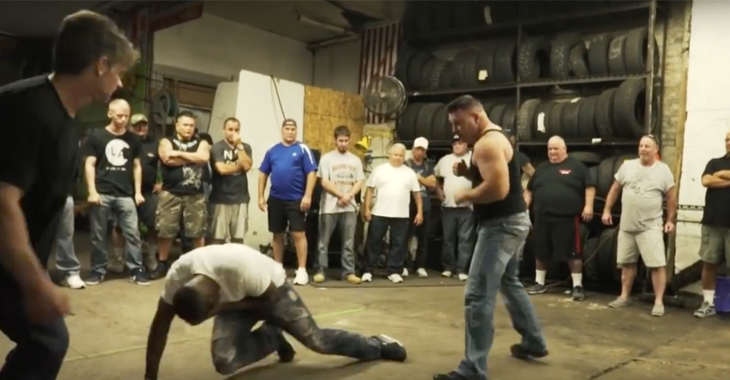 Since the late 1800’s, only one Bare Knuckle Boxing event has been sanctioned in the United States of America.

Well, BJPENN.com has confirmed with sources that a second stateside Bare Knuckle Boxing event is set to take place in Miami, Florida on June 11, 2016.

The event, which is slated to air on pay-per-view, will feature some of the world’s top Bare Knuckle Boxers.

Undefeated Bare Knuckle Boxing champion and Hall of Fame inductee Bobby Gunn (71-0 BKB) is scheduled to defend his world title at the event.

Rumor has it that the former Boxing Cruiserweight World Champion, Gunn, will square off with six-time MMA champion and PRIDE veteran Shannon “The Cannon” Ritch (25-2 BKB) at the highly anticipated event.

“The Cannon” is currently ranked #3 in the BKB world rankings and #1 in the United States.

Bobby Gunn has earned all 71 of his “BKB” victories by way of KO/TKO.

BJPENN.com reached out to Scott Burt, President of the BKB Hall of Fame, to discuss June’s big event and the return of BKB world champ Bobby Gunn. His words:

“Am I excited? Very much so. Alot has happened since his (Gunn’s) 2011 fight. That fight, although extremely historic, was missing some major element that June 11’s doesn’t; namely The National Police Gazette’s authorized BKB Hall of Fame belt and all the recognition that goes with it. In 1884, the belt was first given by Richard K. Fox (publisher of the Gazette) to Jake Kilrain under odd circumstances…. Sullivan was the then American Champ, he won in 1882 by defeating Paddy Ryan and refused to accept a challenge to fight Kilrain in 1887. So Fox stripped Sullivan of the belt, gave it to Kilrain and singlehandedly upped it to a World title all on his own. Finally, and famously, in the last BK fight of that era, in 1889, Sullivan took the fight and won the belt from Kilrain after a 2hrs 16min bout outside in a dirt ring while wearing spikes. That fight went 75 rounds in 104 degree weather in Richburg, Mississippi. This was after training here in little old Belfast NY under his famous trainer William Muldoon…where the BKB Hall of Fame is housed and I unlocked and restored in 2009 after it and his equipment sat there idle for over 120 years. Since 1889, the Police Gazette has not shared or even entertained the thought of giving up control of their belt, which is the Holy Grail not only of BK Boxing, but of ALL Boxing. That is, until February 2016, when current Gazette publisher Steve Westlake unilaterally, without being asked, offered complete 100% control of it to me. He said he had been watching me since 2009, and that if he was to pass the belt’s control, no one in the world deserved to control it other than me; he was impressed with my unselfish passion. What an honor! What a responsibility! So, we had already given Bobby our belt based on his 2011 fight, but immediately upgraded the belt as of February to include the Police Gazette’s authorization and medallions of both Fox and myself too. It’s a beautiful belt. Bobby Gunn is only the third man in history to own it. Kilrain-Sullivan-Gunn. Am I excited about June 11? Sure am!!!! The World is going to be exposed to a much different kind of combat sport…much, much more of a scientific chess match. It is NOT the brutal sport portrayed by the sensationalized papers of 100 years ago done so just to sell papers. A wrong shot can break a man’s hand on top of an opponent’s hard skull…a mistaken one to an opponent’s teeth can cut the knuckles. Gloves are not worn, so opponents do not flail away with disregard. Remember gloves were made to protect hands, not opponents heads. Fighters MUST pick their shots. This makes for a different kind of a sport where fans say…WOW…darn he missed the opening, or THERE IT IS…oops, lost chance. And lightning left hooks make them say, DAMN I MISSED IT. What was old is new again, and I’m proud to be part of bringing back something so pure and honest. And something safe…a much safer sport than gloved Boxing because fighters receive way, way less shots. People are craving for simple, pure and honest, and BKB is it…its a gentleman’s sport…and I’m here to make sure it stays that way.”

Rolling Stone Magazine will be covering the historic event.

Are you excited for Bare Knuckle Boxing to return to the United States? Sound off PENN Nation!