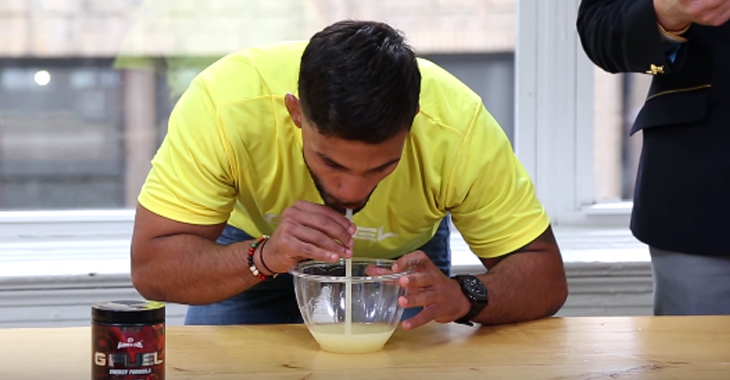 You probably know UFC featherweight fighter Dennis Bermudez. You’ve watched him fight there since 2011, go on a ridiculous seven-fight win streak, even beating Max Holloway early in the champion’s career. You may even know that his next fight will be against Andre Fili at UFC Charlotte. What you may not know, is that he holds the world record for drinking one liter of lemon juice faster than any person ever. He’s not stopping there though, he has even more planned.

“As kind of like a joke, everybody tried it. I was like, ‘Sure I’ll do it. I’ll take a few sips and spit on the guy next to me.’ It’ll be funny. Then, they started counting down and I was like, ‘Oh, we’re competing. You know what, Dennis? Give it all you got.’ […] For sure [I’m going to try and break another world record]. I’m in cahoots with the Guinness Book of World Records now, and we’ve got three other things I might possibly be able to conquer. One is to drink a frozen drink. One is to drink ketchup, and the other one is to drink mustard. They are different amounts and certain times.” — Dennis Bermudez speaking to FloCombat.

In order to break the record for drinking lemon juice, Dennis Bermudez gulped down the entire liter in 22.75 seconds. If he wants to beat the world record for ketchup and mustard, the fastest time to drink a bottle of ketchup is 25.37 seconds and the most mustard drunk in 30 seconds from a tube was 14.7 ounces. Those stats have our gag reflex working overtime just thinking about them, but good luck to Bermudez on shattering more records.